Firmicutes are the single largest grouping of bacteria.

Though because it is dominated by a number of very successful genera, it contains somewhat less diversity than the proteobacteria.

The Firmicutes are all gram-positive bacteria, unlike the Proteobacteria which are gram-negative. The Firmicutes are further divided according to their GC ratios. This is the ratio of Guanine and Cytosine to Guanine, Cytosine, Adenine and Thymine in the cell.

Fermicutes are either High GC or Low GC. Each of these categories contains 3 major groups:

There are a number of important and well known genera in this group.

The first is Staphylococcus, which though it contains over 40 species known to science, is of interest because of two species which live on mankind: S. epidermidis and S. aureus.

S. epidermidis is the most common bacterium isolated from human skin. It is non-pathogenic, so no-one really worries about it. S. aureus is a yellow pigmented species commonly associated with a number of diseases, such as boils, pimples, pneumonia, osteomyelitis, meningitis and arthritis.

The genus Sarcina is less well-known to the general public. Its main claim to fame is that S. ventriculi is one of the few bacteria capable of growing in the human stomach, where the pH is about 2-3. It has been found to be associated with pyloric ulcers.

A large number of bacteria are linked together as Low GC Lactic Acid fermenting bacteria, on the basis of their production of Lactic Acid.

These species all grow anaerobically by preference, but can grow in the presence of oxygen as well. Unlike many other anaerobic bacteria for whom oxygen is a poison. Technically, they are referred to as aerotolerant anaerobes. Some species produce only Lactic acid as a result of the fermentation of sugars, others will produce ethanol and carbon dioxide as well.

All of these species are chemoorganotrophs with limited biosynthetic abilities and thus need to live in habitats where sugars and amino acids are available, i.e., in plants and animals.

The most important genera to mankind are Streptococcus and Lactobacillus.

Streptococcus pyogenes is responsible for numerous human diseases such as Scarlet Fever, Rheumatic Fever and Streptococcal Pharyngitis. About 50% of all the cases of severe sore throat are caused by S. pyogenes. S. pyogenes can also cause Impetigo, though this is more often caused by Staphylococcus aureus.

The other major infective species of Streptococcus is S. pneumonia which causes a form of pneumonia called Pneumococcal Pneumonia, which if untreated can result in death in 30% of cases. Species of Lactococcus, a closely related genera, play an important part in the production of fermentative products such as Buttermilk and Silage.

Species of Lactobacillus are economically important in the production of various fermented products.

L. bruceckii is used to make yoghurt while L. acidophilus is important in the production of Acidophilus milk. Other species help produce pickles, sauerkraut and silage.

This is another large group of bacteria, linked – as their name suggests – by their ability to form spores.

Spores are a highly resistant mode of propagation and successful strategy for bacterial reproduction.

Primarily, these bacteria are chemoorganotrophic soil species. Even those that cause human diseases do so accidentally.

Bacillus is the second largest genus in this group.

Two species are well liked by mankind because of their ability to kill insects. Bacillus papilliae infects and kills the larvae of the beetles in the family Scarabaeidae. While B. thuringiensis is now being produced by scientists in a number of forms, each of which only attacks one species of insect.

In this way pest species can be specifically targeted, without risk of beneficial insects being harmed. The genes for the toxin produced by the bacteria are also being given to plants to make them resistant to insect pests.

The largest genus in this group is Clostridium.

Clostridium species are anaerobic. Normally they live in the soil in small pockets of anaerobic habitat created there as a result of the normal breakdown of organic matter. C. pasteurianum is an important nitrogen fixer and C. cellobioparum and C. thermocellum are important degraders of cellulose.

Several species can be pathogenic to humans, these include C. botulism which causes Botulism and C. tetani which causes tetanus. 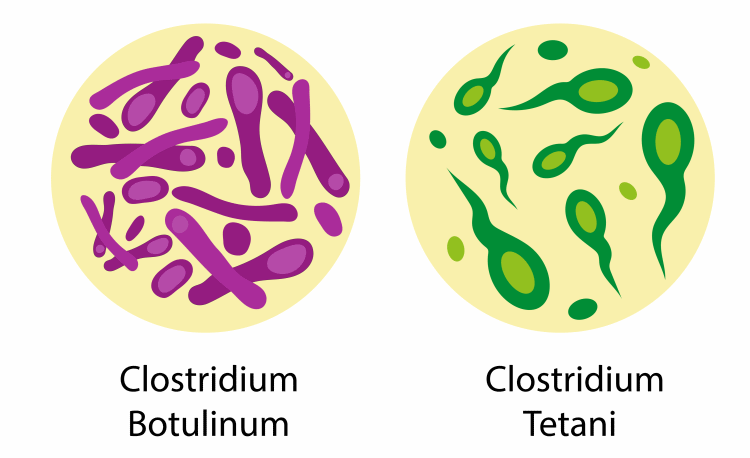 Botulism occurs in a number of other animals as well as mankind, such as sheep and ducks. But scientists do not yet know why the bacterium produces the toxins that cause the disease.

However the news is not all bad, the botulism toxin itself – when isolated, can be used in controlled doses as a muscle relaxant to help treat people suffering from Multiple Sclerosis and Parkinson’s Disease.

Sporosarcina is unique to this group, in that it is a coccoid shaped bacterium not a rod shape.

Wall-less bacteria cannot be gram positive because the gram test is the result of a staining agent binding to the cell wall.

However, DNA testing indicates that they are more closely affiliated with this group of bacteria than any other – so they are traditionally included here.

Mycoplasma cells can be very small. In some cases the smallest known living and growing cells, 0.2 x 0.3 microns. They also have a very small amount of DNA. Mycoplasma genitalium is one of the smallest species known, with a genome (total amount of DNA) of only 580,000 pairs of bases (Adenosine, Cytosine, Guanine and Thymine, etc).

The DNA of M. genitalium has been completely sequenced by microbiologists, who believe that it may be close to the theoretical lowest limit for a living functioning organism. The cell membranes of Mycoplasma species contain chemicals such as sterols and sometimes lipoglycans, which help them remain stable and resistant to osmotic lysis.

The coryneform bacteria have the interesting habit of forming “v-shaped” cell arrangements, due to an unusual snapping movement in the final stages of cell division.

Other than this, they are rod-shaped, anaerobic bacteria commonly found in soils. In fact, members of the genus Arthrobacter are among the most common of soil micro-organisms. They are also of interest because of their ability to degrade complex molecules such as phenols, caffeine, nicotine and even herbicides.

The other important coryneform genus is Corynebacterium, which includes a number of species pathogenic to plants and animals. The most significant of these is C. diphtheriae which, as its name implies, is the causative agent of Diphtheria.

Propionic acid bacteria are all part of the genus Propionibacterium.

They are of interest because of the role they play in the formation of the holes in Emmentaler Swiss Cheese. The milk fat is originally inoculated with a mixture of streptococcus and lactobacillus species, as well as the propionic bacteria.

These two species convert the lactose in the milk fat to lactic acid. After the curd has been drained, the propionic bacteria oxidise the lactic acid to pyruvate, which is then converted to propionate. During this process, carbon dioxide is released.

It is this carbon dioxide collecting in bubbles within the solidifying cheese, that forms the characteristic holes in Emmentaler Swiss cheese.

Like the Propionic bacteria this group consists of a single genus, Mycobacteria.

The 85 species in this genus are easily identified because of the presence of mycolic acid on the surface of their cells, giving them a property called ‘Acid Fastness’.

The staining technique to identify them was first discovered by Robert Koch in 1882. Microbiologists divide Mycobacterium sp. into two groups: Fast Growers and Slow Growers. Slow Growers such as M. tuberculosis can take several days or even weeks to produce visible colonies.

The genus Mycobacterium contains a number of species pathogenic to humans.

Other pathogenic species include M. bovis a pathogen of dairy cattle which can infect humans through unpasteurised milk and cause tuberculosis. Then the M. avium complex, which also causes tuberculosis particularly in AIDS victims.

Two other species, M. kansasii and M. chelonae, are also recorded as causing disease in humans.

The Actinomycetes is a very large group of bacteria that form branching filaments of cells, which become a network of strands called a mycelium, somewhat like (but not the same) as the mycelium of some fungi.

They are also unique in the way they form spores and in the production of numerous antibiotics. By far the most successful genus in this group is Streptomyces with 509 species.

Most Streptomycetes are soil organisms, commonly found in sandy loam soils. Most of the earthy smell of soils arises from chemicals given off by a Streptomyces species called geosmens. For those who like tongue twisters, a typical example is called trans-1,10-dimethyl-trans-9-decalol.

Streptomyces species produce spores from aerial filaments called sporophores. These rise above the colony and form spores called conidia by simple cross-wall divisions of the filament.

Some species may produce more than one antibiotic and species from different habitats may produce the same antibiotic. Over 50 different antibiotics have been isolated from Streptomycetes – and the most important of these are of great medical value, i.e., Streptomycin, Neomycin and Chloramphenicol.

Well, we hope this page has been a useful introduction for you in understanding the huge variety of living organisms that make up that group of bacteria we call the firmicutes!