One of the endearing and endlessly fascinating things about birds is the beauty of their singing.

Nearly all birds make some noises. Sound can be a prelude to – or part of – courtship, or a means of simply staying in touch with the flock.

It can be a way of identifying either your young, or your parents.

An efficient method of sending out a quick warning of approaching danger is an integral part of both a bird’s…  and a bird watcher’s life.

For this they have – like you and me – ears.

Birds have good ears but they tend to hear things differently to us.

Bird ears are not the same as human ears.  They do not have external ear lobes like we, or dogs and rabbits do, just a little fold of flesh. The birds ear exists only as an opening, a tube and the internal parts.  Seen from outside bird ears they are covered by barbless feathers (called auriculars or ear coverts) at the body surface.  This is why you can’t see a bird’s ears easily.

The covering feathers protect the ears from air turbulence while they are flying as well as keeping out dust and water.  The fact that they lack barbs means they do not interfer with sound entering the bird’s ears.

A bird’s ears, and their associated openings, are situated behind and slightly below its eyes.  You can see the position of the ear opening clearly on the head of a plucked chicken.

What Can Bird Ears Hear?

Birds cannot do this.

Bird ears do however recognise ‘timbre’ (a fundamental note combined with harmonies). Recognising timbre and harmonic variations gives birds great versatility in the sounds that they can respond to – and in some cases reproduce.

Bird ears also hear shorter notes than we can. Humans process sounds in bytes about 1/20 of a second long, whereas birds discriminate up to 1/200 of a second. This means where we hear one sound only, a bird may hear as many as ten separate notes.

Some birds, such as Pigeons, can hear much lower sounds than us. Birds (Pigeons) can be music buffs and can distinguish between human composers such as Bach and Stravinsky.

The range of hearing in many species of birds is comparable with that of mankind.

Having a greatest sensitivity between 2,000 and 4,000 hertz (cycles per second). This is partly why bird song is so useful in bird identification – it is easy for us to hear and also why we find bird song so pleasant. In birds as a whole, the known hearing ranges vary from a lower limit of below 100 hertz to over 29,000 hertz, though not all birds have this range. The common Mallard (Anus platyrhynchus) for instance has a range from 300 hz to 8,000 hz.

Some birds have hearing much more sensitive than ours.

Owls not only are more sensitive to small sounds, but have asymmetrical ears (one ear being lower on the skull than the other). This means sounds from a single source reach the bird’s ears at slightly different times. This gives the owl the equivalent of binocular hearing, allowing them to pinpoint the source of a sound extremely accurately.  The shape of a birds head is also important in how it hears.

Barn Owls, Tyto alba, can locate and catch small mammals in complete darkness using only their hearing. Finally, a number of species of owls have tufts of feathers which look like ears and give rise to names like ‘Long Eared Owl’ and ‘Short Eared Owl’. These ‘ears’ are not ears at all, however, and have nothing to do with hearing.

Birds lack the externally visible part of the ear that we think of as an animal’s ear – and which is strictly speaking called the pinna. 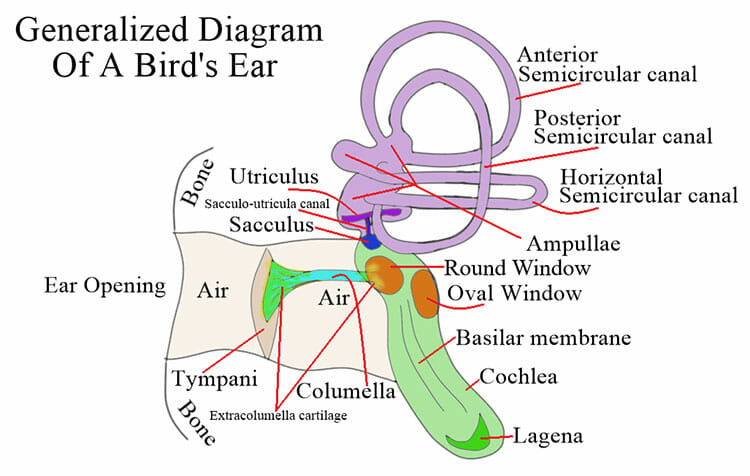 How do Bird Ears Work?

A bird’s ear has three chambers, much like ours.

The outer ear is simply a tube leading to the tympanum or ear drum. In birds this is a double membrane and slightly convex on the external side.   Behind this is the middle ear which has a single bone connected to it called the columella. This is where, in mammals, you have an arrangement of three bones (Hammer, Anvil and Stirrup/Stypes).   The columella is a bone and so it is connected to the tympani (ear drum) and the round window by cartilaginous ligaments.

The inner ear is bathed in fluid, unlike the outer and middle ears which are air filled. A birds inner ear consists of five parts, of which two, the semicircular canals and the utriculus are concerned with balance. The other three are the cochlea, its lagena and the sacculus. The sacculus is connected to the utriculus via the sacculo-utricula canal.   The cochlea is a hollow fluid filled bone with the basilar membrane within it.  It is the hairs on this membrane that convert physical sound waves into electrical impulses for the brain the interpret. The lagena is used to help detect low frequency sounds, the sacculus to help detect high frequency sounds

The cochlea has two membranous windows in it.  The round window which receives the vibrations from the tympani (ear drum) via the columella and transmits them to the fluid inside the cochlea.  Slightly behind and below this is the oval window which works in sympathetic opposition to the round window.  This is necessary to allow the sound waves to move the fluid inside the cochlea.

Bird Ears As Organs Of Balance

The ear evolved in fish as an organ of balance and it still performs this function today in both birds and mammals.

A bird’s organ of balance consists of three semicircular canals. These are situated above a part of the inner ear called the utriculus.  Each one of these three canals lie in the three different planes of the material world and are called posterior, anterior and horizontal.

Bird ears contain a fluid and sensitive hairs. Movement of the head causes the fluid in the canals to move, which energizes or triggers the sensory hairs. The degree of movement of liquid in each canal combines to tell the bird exactly where its head is at any given moment in time.

This is very similar to how the human sense of balance works. Naturally, for creatures who move in a fundamentally more three dimensional universe than we do, a good sense of balance is very important.

Birds Can Hear Even Before They Are Hatched

Birds start using calls early in their lives, in some species even before they are hatched.

Quail chicks use calls to communicate with each other and their mother from inside their eggs. In this way they are able to synchronise their hatching so that they all emerge from the eggs within the space of a couple of hours.

Some birds, such as Mallards, have special maternal calls that they give while incubating the eggs – so that after hatching the mother only has to give this call, to have the chicks rush to her for protection.

Sound is often more important than sight in parent-offspring recognition.

A deaf female turkey is unable to recognise her own chicks and chickens cannot recognise silenced chicks (with a bell jar over them). Experiments have also shown that, in colony nesting birds at least, young birds can recognise their own parents by their calls alone – though they all sound the same to us.

Not all young birds learn to recognise their parents or vice versa immediately.

In Herring Gulls, about 5 days pass before this recognition takes place, while Kittiwakes take up to 5 weeks for recognition to register.

Birds also distinguish their mates by call. Gannets are colony nesting birds and a nesting site can have thousands of birds coming and going in a noisy melee that would befuddle a human listener. Yet gannets can distinguish the calls of their particular mate from all those around them, on the basis of only 1/10 second of the total call.

Birds Use Sounds Other Than Those Created By Their Vocal Chords

Sounds can be created by stamping, as in Coots, or by clacking the mandibles together as in Frigate birds, Albatrosses and Storks. Birds also use their wings to create sounds, simply by clapping them together as the wood pigeon, or by having modified feathers which vibrate at a set frequency when exposed.

Snipe use this during courting. Two feathers on either side of the tail vibrate as the bird falls out of the sky. Other birds which make sounds with their wings include Mute Swans, Broad-tailed Hummingbirds, Bellbirds and the New Zealand Tui.

Perhaps the best known of these percussive sounds is the drumming of woodpeckers. Each woodpecker, in those species tested, has its own drumming pattern so male and female birds can easily recognise each other while they are out foraging.

Perhaps the most unusual however is the Palm Cockatoo, which makes drumsticks from twigs and beats them against a hollow log in time with a pirouette during courtship!

Several species of cave dwelling birds use echolocation, similar to bats, to detect objects around them in the dark.

Swiftlets from S.E. Asia – also known because some of them produce the nests used in making bird-nest soup – use sounds with a frequency between 4.5 and 7.5 kHz to navigate in the caves they nest in.

Oilbirds in South America also nest in caves and use sounds in a range between 1.0 and 15 kHz, emitted in staccato bursts, to navigate inside the cave.

Unlike the Swiftlets, Oilbirds are nocturnal, but they do not use their echolocation outside of the cave. The sounds both these species use are audible to the human ear… and sounds caused by a flock disturbed by a human intruder in their nesting caves have lead to many tales of devils and demons.

The echolocation of both these species is considerably less efficient than that of bats – because the sounds are lower and therefore have longer wavelengths.

This means that they cannot distinguish smaller objects. Oilbirds cannot, apparently, detect anything smaller than about 15cm diameter while Swiftlets have a lower size limit of about 6 cms diameter.

Bird Ears and The Paratympanic Organ

Located within the ear of birds is a small, poorly studied organ known as the paratympnaic organ.  It was discovered for humanity by Giovanni Vitali in 1911.  Vitali continued to study the organ until 1941 and since then a mere 27 papers have been published on it.  According to Bartheld and Giannessi, who published a review of the Paratympanic Organ in 2011 its function is still not fully understood, or at least has not been fully proven.

However, because of its position and structure, including the nerve connections, it is believed that it serves the bird as a barometer and altimeter by sensing changes in air pressure.

The PTO is located in the medial wall of the tympanic cavity, above the opening of the Eustachian tube, adjacent to the stapedial artery and auricular vein, and dorsolateral to the columella in the avian middle ear.

This tissue that makes up the PTO contains a elongated vesicle (fluid filled bladder). The lumen (central area) of this vesicle is filled with a mucous, gelatinous fluid, and its medial side (situated near the midline) contains a sensory epithelium covered by a gelatinous cupula (small dome). The sensory cells have been identified as type-II hair cells by electron microscopy each with 40–100 stereocilia and one kinocilium that extend into the fluid-filled lumen.

Well, we hope you’ve learned enough about the wonders of the humble bird ear and how birds manage to hear!