Introduction to the Placozoans

Placozoa – Etymology: From the Greek Plakos for flat and Zoon for animal – hence Placozoa is a ‘flat animal’.

Placozoans are among the simplest metazoan animals known to science.

They are very small, usually only two to three mm across and only 25 μm from top to bottom.  Placozoans are definitely wafer-thin, 25 μm is only 0.025 of a millimeter.

They are fascinating to science because they appear to represent a very basic form of multicellular organism.  They have only six different types of cells, 98 million base pairs in their genome and digest their food outside of their body.  This last is necessary because they have no internal organs, no brain or nervous system, no mouth, anus of digestive tract and no circulatory or excretory systems.

Placozoans resemble large amoebas, their body has no left or right, no front or back, just an up side and a down side.  As they move they constantly change shape.

Placozoans are common in most tropical and subtropical marine ecosystems, and less common in temperate seas.  They are commonly collected by leaving glass slides in the water for some time and then examining the slides.  This capture technique has shown that while they the surface of the substrate they also occur in open water.

Trichoplax adhaerens was first discovered in 1883 in a marine aquarium in Austria.  At the time of discovery, and until recently it was considered to be planuloid larvae of some kind. Then in the 1960s it was discovered that they could reproduce sexually and they were given their own phylum. In 2017 two more species, in two new genera, were added to the phylum.  Scientists consider that many more species may exist.

All three described species are morphologically identical.  Species identification therefore is only possible through DNA analysis.

The Placozoa have had more of their genomes sequenced than they have recognized species, something that no other animal phyla can claim.  Despite the fact that only three species are currently recognized by science, it is believed that many more species exist.  Genomic studies suggest that the true diversity may be as high as 80 species.

Several scientific studies based on 16S, 18S, 28S and ITS sequence data indicate the existence of eight separate lineages. These eight lineages are organized into five distinct clades (higher taxonomic categories) possibly representing different families or even different orders. The number of recognized haplotypes is currently sixteen.  Currently no class or order, and only one family, level taxon have been described within the phylum. 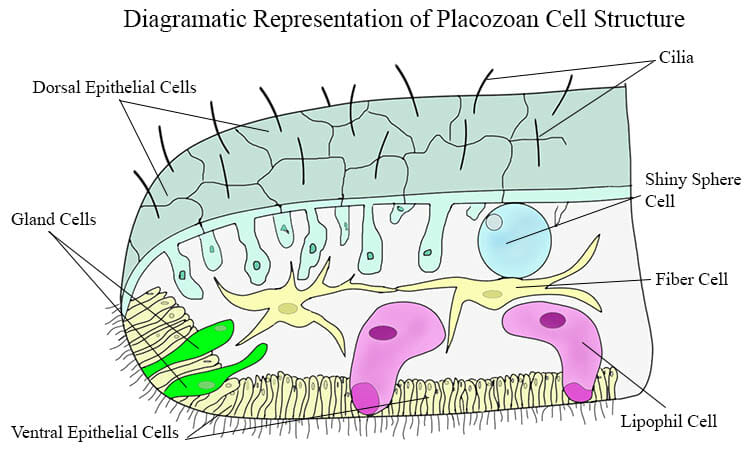 Basic Biology of the Placozoa

The placozoan body is made up of a few thousand cells at most. Each body, though basically disc shaped, changes shape like an amoeba as it moves around. Because it has no front or back it moves in any direction, gliding along on its ciliated under-surface. It can change direction without needing to turn its body, it simply moves in a new direction.  Sometimes larger specimens can reproduce by a kind of budding.  The body appears to go in two opposing directions at the same time until it splits into two separate individuals.

Polyplacotoma mediterranea came to scientists attention because it has the unusual ability to be able to adopt a highly ramified body shape.  Meaning they can stretch their body out thinly, something other placozoans have never been observed doing.  This can result in P. mediterranea achieving a temporary body length of 10 mm.

The basic Placozoan body plan is built up of just six different cell types (Smith & Mayorova 2019);  This gives it the simplest adult body plan of any multicellular organisms (some larval forms have fewer basic cell types).  These cell types all have their specific place in the anatomy of the animal.

The placozoan body consists of two cell layers, a top and bottom surface enclosing a fluid filled space containing a network of stellate fiber cells. It has a surprisingly small amount of DNA in its cells, 98 million base pairs, similar to species of bacteria, rather than other metazoans.

The interior of the animal is a thin, flat space made up of fiber cells and liquid.  These fiber cells are poorly understood, but appear to have thin connections similar to dendrites connecting them to other cells.  Therefore it is hypothesized that they may serve for internal co-ordination and control.  The final cell type is a spherical ball like thing called a shiny sphere.  These shiny spheres are located near the upper surface at the interstices of the upper epithelial cells.  The can escape the body and are believed to have a predator deterrent action. They contain a birefringent crystal in lipids.

All known Placozoans are a marine animals, but they are very seldom recognized or identified. They are most common in the tropics, but can also be found in subtropical and warm temperate waters.

They glide over the surface of the substrate, propelled by the beating of their cilia.  When they pass over a suitable food item their cilia stop beating and the animal remains still to feed.

They feed on protozoans and algae. During the feeding process they rest their body over the prey and then secrete digestive enzymes onto it from they lipophil cells. As the food item’s body breaks apart the resulting nutrients are absorbed by the same cells that secrete the enzymes.

Reproduction can be asexual by either binary fission or budding and accidental cutting of the body into several parts, which results in each part becoming a new smaller placozoan. Eggs and sperm are known to be produced but nothing else is currently known about how sexual reproduction actually happens.