So, what makes an insect an insect?

Because of the great diversity of form exhibited by the insects, any introduction to insect anatomy like this is only going to be able to cover the basics.

Within each order and family, these familiar themes are replayed in a myriad of different ways – creating what might seem to be a bewildering array of different body plans. A closer look will reveal the same basic plan in all insects, at least in the adult forms.

The insect body has a hard exoskeleton protecting a soft interior; and the insect anatomy can be divided into three main body parts (use these links to navigate to body part specific pages):

Each of which is in turn composed of several smaller segments.

The amazing success of the insects must in part lie with the incredible mixture of flexibility and strength of the integument (the part of an insect that makes up the hard exoskeleton) that allows insects their freedom of movement, without loss of defence and protection.

It is made up of three parts, the most visible of which is the outer ‘cuticle’ and its attendant bristles and hairs; below this are the ‘epidermis’ and the ‘basement membrane’

The cuticle is a relatively thin layer of non-cellular material which lines the external surface of the body, as well as lining the tracheae, the anterior and posterior sections of the alimentary canal and parts of the reproductive system.

It is flexible, elastic and white when first formed and stays this way in many larval forms. However in most adults, it undergoes chemical processes which result in hardening and darkening and which are referred to as ‘sclerotization’.

The cuticle can be divided into two layers.

First, a very thin outer layer called the epicuticle which contains no chitin and is highly resistant to water and other solvents.

Secondly, and beneath this, is the much thicker procuticle, that can again be divided into two distinct layers of its own. An outer ‘exocuticle’, which lies immediately below the ‘epicuticle’. And an inner ‘endocuticle’, which consists of a large number of layers of protein and chitin fibres, laid down in a laminated pattern such that the individual strands in each layer cross each other – thus creating an extremely tough and flexible substance.

Below the cuticle lie the other two components of the integument, the ‘epidermis’ which is a single layer of secretary cells and the ‘basement membrane’ which is an amorphous layer about 0.5 micrometres thick.

The insect nervous system consists of a ‘brain’ (the result of the fusion of 3 pairs of ‘ganglia’ [a ‘ganglion’ {plural ‘ganglia’} is a collection of neurons or nerve cells in a single place]).

A pair of slender connectives cords run, side-by-side from the brain to the end of the insect’s abdomen and are known as the ‘ventral nerve cord’. These connective cords meet at intervals along the insect’s body at the ‘ganglia’. 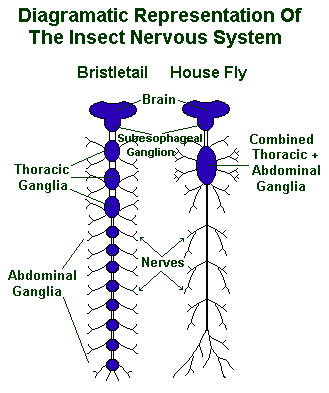 In the most primitive design, there is one pair of ganglia per body segment. Thus, as the head is made up out of 6 fused body segments, it contains 6 pairs of ganglia. These are collected into 2 groups, each of 3 ganglia; the foremost of which is called the brain and the hindmost the ‘subesophageal ganglion’.

The ganglia function to co-ordinate the activities of the body segment they represent. In the most basic design, there are usually 3 thoracic ganglia and 8 abdominal ganglia; but in most of the higher insects some of abdominal ganglia have been lost, or become fused with those nearer the head.

In the cockroach Blatta orientalis, there are 3 thoracic and only 6 abdominal ganglia. In the hornet Vespa crabro, there are only 2 thoracic ganglia and 3 abdominal ganglia, the hind most of which is very mich larger than the other two because it is made up of a number of ganglia fused together.

This trend culminates in insects such as the common house fly, Musca domestica, where all the abdominal and thoracic ganglia have become fused into a single compound body-ganglion.

Insects have no lungs!

Diffusion of gases is effective over small distances, but not over larger ones. This is one of the reasons insects are all relatively small. Insects which do not have spiracles and tracheae, such as some Collembola, breath directly through their skins, also by diffusion of gases.

The number of spiracles an insect has is variable between species. However they always come in pairs, one on each side of the body, and usually one per segment.

Some of the Diplura have eleven pairs, with four pairs on the thorax. But in most of the ancient forms of insects – such as Dragonflies and Grasshoppers – there are two thoracic and eight abdominal spiracles.

However, in most of the remaining insects there are less; so that Hoverflies, Syrphidae, have only two pairs, both of which are on the thorax and none on the abdomen. While many Mosquito larvae and aquatic Beetle larvae have only one abdominal pair of spiracles. Many insects have valves that allow them to close their spiracles, thus preventing water loss. 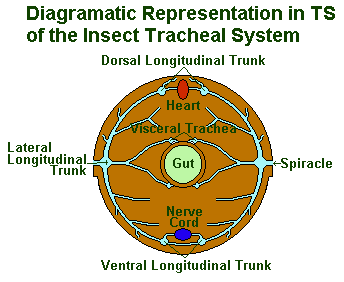 The tracheae, which are thin pipes, spread out from the spiracles to reach the whole body, with the smallest tracheoles contacting single muscle cells individually. In some of the Collembola, each spiracle produces a tree branch, or tree root, of tracheae that are separate from those of other spiracles.

However, in most insects the tracheal system is all linked through a series of longitudinal pipes called trunks and many smaller connections. See the diagram above:

In many insects, particularly the larger hymenoptera, the tracheae also link to a series of airsacs which can store air.

Most insects can use their body muscles to squeeze their tracheae and airsacs, thus forcing air out; and on release of the muscular tension, drawing fresh air into the large tracheae. In insects like the dragonflies this is a continuous action, but in others it is irregular – as in cockroaches – or only occurs after active exercise, as in the larger hymenoptera.

Hearing (Do Insects Have Ears?)

Many, but not all, insects can hear sounds. Some even hear sounds that we can’t hear ourselves.

Insects hear through one of four different ways, the most common of which is the tympanum.

Tympanal organs always occur as paired organs; they are composed of a thin cuticular membrane (the tympanum) stretched across an air space of some sort –  and some form of connection to the nervous system.

In the Orthoptera (Grasshoppers and Crickets) tympanum are common, though situated in different places in different species, i.e. on the first thoracic segment in Grasshoppers and on the front legs in the Crickets. Tympanal organs also occur in the Cicada (Cicadidae, Hemiptera) and some families of the Lepidoptera, (i.e. Noctuidae, Geometridae, and Pyralididae).

The other three forms of insect hearing organs are:

Touch is an extremely important sense to insects and – like smell – insects have developed many different ways to detect mechanical stimulus. These all involve some form of physical change in the receptor.

The most common are hairs attached to nerves which react when the hairs are moved – these are called Trichoid sensilla.

Another common type looks more like a drum, with something pressing up against the skin of the drum from beneath – these are called Campaniform sensilla. Mechanoreceptors detect not only the physical interaction with another body, but also air movements, changes in air pressure and also changes in the stresses being applied to the insects cuticle (thus allowing it to better control its movements and maintain balance).

Insects also use modified forms of the various sensory detectors described above to detect changes in temperature, humidity and also in some cases to detect infra red radiation, x-ray radiation and the Earth’s magnetic field.

Well, I hope you have found this page useful… You could spend your entire life studying insect anatomy – a field which only seems to expand in depth the more attention you pay it – and using a microscope is the perfect place to start. You can even record your findings by mounting a camera on a trinocular stereo microscope!