Storm Petrels were formally considered to be a part of the Procellariidae, but are now generally accepted as a separate family Hydrobatidae.

They are visually separated by having only a single opening serving both their nostrils.

They are difficult birds to identify because they are all very similar in size and colour. Most species being black with a white rump.

Some Southern species also exhibit polymorphism in their colouration, meaning not all members of the species have the same colouration.

Storm Petrels – sometimes called Mother Carey’s Chickens – by sailors in the past, are all small birds. The largest being only 25cm or 10 ins long. They have an average wingspan of 45cm or 18 ins. 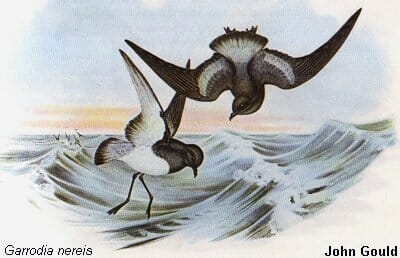 They are difficult birds for most people to see because they spend all their lives at sea when not breeding – and even during the breeding season they only come to land after dark and leave again before dawn.

This is probably an adaptation to avoid aerial predators.

They feed on Zooplankton, mostly crustaceans and other small marine organisms which they pick from the surface whilst flying over the sea. These include squid, as well as insects in the form of Halobates spp. (Heteroptera: Gerridae).

At times they appear to be almost walking on the water, as they tend to have their feet extended downwards to the waters surface while feeding.

Many species like the European Storm Petrel (Hydrobates pelagicus) are great ship followers.

Several species undertake some of the longest migrations known, such as Wilson’s Storm Petrel Oceanites oceanicus which travels in a figure eight each year from its Antarctic breeding grounds to the subartic non-breeding season feeding grounds and back again.

While Matsudaira’s Storm Petrel Oceanodroma matsudairae migrates East-West between the Indian and Pacific oceans. Other species have only small migrations, or do not migrate at all. In one species at least, White-faced Storm Petrel Pelagodroma marina, some populations migrate across the equator while others do have lesser migrations and some merely appear to disperse after breeding rather than migrating.

As with other small petrels most species nest in holes. 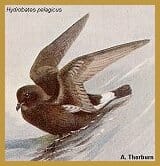 Often quite deep ones, though a few species will nest in rock crevices. The nest itself is rudimentary, or non-existent. Also like all the Procellariiformes they lay only one white egg per breeding season. The nests are almost exclusively made on uninhabited offshore islands

On land they are quite ungainly and many species have difficulty standing on their feet. Instead they tend to rest both their feet and tarsi on the ground to stand on and to walk with.

They are adept in the air however and some species such as Wilson’s Storm Petrel Oceanites oceanicus are recorded as indulging in intricate aerial chases as a part of their courtship behaviour.

They are highly vocal birds, especially during the breeding season and around the colony. Their calls being described as a twittering, whirring, churring and creaking. Calls include flight calls, distress calls and a variety of antagonistic calls used in nest burrow defence.

There appears to be a wide range of variability between and within species as the the way calls are used, which has made it difficult for human observers to quantify them – but the birds seem to understand each other OK.

Digging a nest burrow, especially if the soil is stony, can be energetically expensive work for a small bird – and existing burrows are therefore important possessions.

Storm Petrels digging burrows have severely warn bills and claws (this applies to all the hole or burrow nesting petrels). Fights involving attempted usurpation of a nest owner, even one incubating an egg are not an unusual and can become quite physical, normally the possessor remain in possession.