Mammals are vertebrates by definition. This means that all mammals have an internal bony support structure, to which muscles and ligaments are attached.

This is what we call a skeleton.

The basic plan of the mammalian skeleton (as seen above) is fairly straight forward.

It consists of a head at one end of a vertebral column, from which extend ribs to support the working organs, and four limbs for locomotion. The vertebral column ends in a tail.

The huge range of lifestyles and habitats utilised by mammals means that a great deal of variety exists between different groups. Some species lack a tail, others lack apparent hind limbs and the skull is very variable.

Here I am going to give you a general outline of the mammalian skeleton, with some notes to indicate particular variations. To understand the skeleton fully you should also have a look at the pages on Mammal Bones and Mammal Teeth.

The vertebrate skull in general and the mammal skull in particular is a complex amalgam of bones. Not just one or two, but about 34 bones – if they all are present – make up the skull and lower jaw.

Most of these bones are now fused together, though anyone who has looked carefully at a mammal skull will have notices the crinkly lines where the once individual bones meet. Most of them come in pairs, one each side.

The skull can be divided into 3 basic parts; the Braincase (enclosing the brain); the Rostrum (the snout and upper jaw); the Lower Jaw.

Some of the main bones of the mammalian skull are:

The spinal column in mammals, as in other vertebrates, is composed of a series of small bones with one or more holes through their centre.

These holes are aligned to make a highly protected tube. This tube houses and protects the spinal chord a thick sheath of nerves and ganglia that is the unifying characteristics of the Phylum Chordata.

The Phylum Chordata contains the Subphylum Vertebrata and hence the Class Mammalia.

In many mammals, the vertebrae can be seen to be divided into five distinct regions – though in some groups such as the whales they are pretty indistinct. Where the adjacent vertebrae meet each other, they have special smooth, flatish surfaces called zygopophyses. These contact surfaces are also protected by cartilage.

The neck region of an animal is supported by the cervical vertebrae and normally in mammals there are 7 of them.

The first vertebra, the one immediately behind the skull, is called the ‘Atlas’. It has two large depressions in its front face which accept (articulate with) the occipital condyles, two bumps unique to mammals found at the base of the skull. It also has a slot in the rear face to accept the odontoid process, a forward project of bone on the second vertebra.

This second vertebra is called the ‘Axis’. The rest of the cervical vertebrae do not have special names. They are often cemented together for extra strength in digging and swimming mammals.

These are the bones from which the rib bones extend. They often have large dorsal spines. These are usually 12-15 thoracic vertebrae. The spines help support the muscles that lift and control the neck and head.

The third section of vertebrae are the lumbar vertebrae. These are the rest of the spine down to where the back legs connect. Normally there are only 6 or 7 of them except in the toothed whales (Odontoceti) where there can be as many as 20. Lumbar vertebrae often have numerous spines and processes and can look quite complicated.

These bones support the pelvic girdle and are often fused together. There are usually 3-5 in number but can be more, up to 10 in the Edentata for instance.

The last lot of vertebrae are the bones of the tail. They are generally smaller and less complicated than the rest of the vertebrae. They also do not contain the spinal column, which ends at or before the Sacral vertebrae. Though they do contain some nerves and blood vessels.

In Mankind and Chimpanzees, the Caudal vertebrae are reduced to 4 in number and are fused to form the Coccyx.

These support the vital organs, making a cage within which the mammal’s heart and lungs can be carried in protection.

Ribs normally arise form the thoracic vertebrae, but in a few groups (Edentata, Monotremata) some species have ribs arising from the cervical vertebrae. Ribs end under or in front of the animal along each side of the sternum (breast bone).

In many species the lower or posterior ribs do not meet the sternum, these are called floating ribs. In most groups, articulated ribs (those which meet and join with the sternum) outnumber the floating ribs easily.

The Sternum or breastbone is actually made up of a number of smaller bones called ‘sternebrae’.

The front part of the sternum is keeled (to give a larger area for muscle attachment) in bats who need to flap their wings – and in many digging species who also need large muscles to work their forelimbs, i.e. moles.

Most of the remaining bones are to do with limbs, either being part of them or supporting them. The two supporting areas are called girdles (Pelvic girdle and Pectoral girdle).

The Pelvic Girdle consists of two halves, each of which is made up of three bones fused together. These two halves are called the ‘innominate bones’.

The three pairs of bones which make up each innominate bone are the Ilium, the Ischium and the Pubic bones. In marsupials and monotremes, another pair of bones are present called the Epipubic bones. The exact role that these play in the life of the Marsupials and Monotremes which possess them is unknown.

The pectoral girdle consists of two pairs of bones, the large flat Scapula (shoulder bone) and the much smaller and more slender Clavicle (collar bone).

The clavicle runs from the far end of the scapular to the sternum in most mammals, though in the Monotremata it meets the interclavicle instead.

Monotremes also have a pair of bones called the Epicoracoid or Precoracoid bones.

In some mammals such as the Anisodactyla, Perissodactyla, Mysticeti and Odontoceti (Horses, Pigs, Deer, Buffaloes, etc. and Whales) the clavicle is absent. The scapula is the bone that the legs or arms start from, i.e. the humerus joins the far end of the scapula at the glenoid fossa. 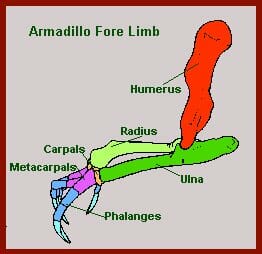 The basic vertebrate limb evolved as the first amphibian-like fish left the warm seas for the new dry land.

It is called the pentadactyl limb, from the Greek penta for five because it ends in five digits or phalanges.

This business of having five separate endings to a single limb was quite an important new development, when it first occurred. It was obviously a good thing though because it has been very successful. The pentadactyl limb supported the dinosaurs for millions of years and has played a major role in mankind’s technological development.

It remains the same all across the vertebrate classes. In mammals it perhaps reaches its peak and greatest diversity. Though the fore and hind limbs are basically the same, they have different names for the various bones.

Thus starting at the body and moving outwards, the forelimbs consist of: 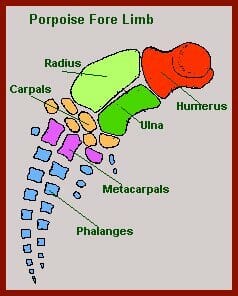 This arrangement allows for greater flexibility and stronger turning/twisting movements than a single bone would.

Though this is not terribly important in some mammals which only use their limbs for walking on. For those who use their limbs (particularly the fore limbs) for grasping, climbing and/or digging it is of great value and has contributed greatly to the diversity of mammals.

The Carpels and or Tarsals come in 3 rows (see the Human fore limb above) and make up the wrist. However as can be seen from the other fore limb images, their number is often reduced and their role less important than it is in the classic design. 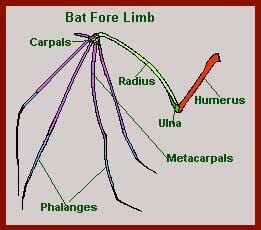 These various other limb bones also have varying degrees of importance in different families of mammals. They have all been modified by the forces of evolution to fulfill different roles, relevant to the different way various animals use their limbs.

In Whales and Dolphins for instance, the number of finger bones ‘phalanges’ in the forelimb has greatly increased. This is known as hyperphalangy. In some families not all the bones mentioned above still exist, some have been lost in the course of evolution.

Like all bones, limb bones contain various ‘processes’ (special extensions of bones to aid muscle attachment) and fossae (smooth surfaces where two bones meet and articulate (move in relationship to each other). 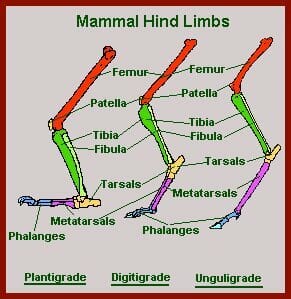 Well, I hope you’ve enjoyed learning a little about the mammal skull, vertebrae and limbs.

For more information on how mammals use their limbs, see the page on mammal locomotion