Sipuncula; Etymology: From the genus sipunculus, as a variation from the Latin Siphunculus – meaning = small tube.

Sipuncula Species Count: According to The Catalogue of Life there are currently 205 of 320 species have been described.

The Sipuncula are a small phylum of small to medium sized marine worms (2 mm to 500 mm).  Over 90% are longer than 5 mm.  They are unsegmented worms that live in the substrate of marine environments. Sipunculans have been on this planet for a long time.  Very few fossil Sipuncula have been discovered because they are soft-bodied animals.  However, three fossils described in 2004 from the lower Cambrian show that they originated more than 520 million years ago.  Since then other Sipunculan fossils have been discovered from the Silurian era.

Two thirds of the known Sipunculan species can be found in relatively shall coastal waters, less than 20 meters in depth.  Despite this, some species have been discovered living at depths greater than 6,800 meters. Sipunculans can be found in both soft and hard substrates, among corals, algal mats, living in the shells of dead molluscs and among the roots of mangroves.  On hard substrates they can borrow into the rock, sunken wood and corals.

Sipunculans play an important role in the marine ecology, and are an important part of many marine food chains as they are eaten by fishes and other predators. They have one or two planktonic larval stages which can be quite numerous in the water column, with one species (Themiste lageniformes) recorded with a density of up to 2,000 individuals in square meter. They also are important in the recycling of detritus. 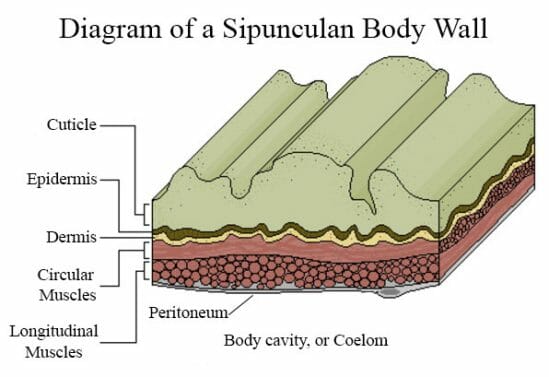 The sipunculan body is divided into trunk and a retractable organ called an introvert. The ratio of introvert length to trunk length varies among species and can only be fully assessed when it is fully extended. In some species the introvert may be more than twice as long as the trunk.

The digestive tract is U-shaped and the anus lies at the anterior end of the trunk.   There are exceptions to this rule in the genus Onchnesoma and four species of the genus Phascolion where itthe nuchal organ is located at the anterior end of the introvert. The paired nephridiopores (except in the genera Phascolion and Onchnesoma where the nephridiopores are singular) are found nearby the anus.

Sipunculans often possess hooks on the distal part of the introvert. These hooks are proteinaceous and non-chitinous in nature, and are secreted by the epidermis.  They are either arranged in rings or scattered. Usually they are curved posteriorly and can have a variety of shapes and internal structures.

The body wall consists of a non-ciliated epidermis beneath a cuticle and above the dermis.  Musculature usually consists of an outer layer of circular and an inner layer of longitudinal musculature. In some larger species, oblique muscle fibers may be present between the longitudinal and circular muscle layers.  The rest of the body is the coelom which is lined and separated from from the body wall by the peritoneum.

The spiunculan central nervous system consists of an anterior cerebral ganglion with a circumesophageal connective and a ventral nerve cord.

The coelomic cavity fills most of the body and encloses the interior organs, the digestive organs. The tentacles and the contractile vessel (a fluid reservoir that allows the tentacles to be extended) comprise a second coelomic compartment. The intestines are characteristically U-shaped, with the ascending and descending branches coiled around each other in a double helix.  A spindle muscle runs through the gut coil. It is attached anteriorly to the body wall near the anus and posteriorly to either the body wall or inside the gut coil.  There are also paired muscles for extending and retracting the introvert.

Life Styles and Diets of the Sipuncula

Many species that live in the lighted zones of the ocean are nocturnal, for example, Sipunculus nudus which lives in burrows in the sand remains hidden in its burrow during the day, only extending its tentacles to feed at night.

Most sipunculans are deposit or detritus feeders, using their tentacles to collect and ingest the substrate. Exceptions to the deposit feeding habit include members of the the genus Themiste, which have elaborately branched tentacles they use for filter feeding.

Species that live on rocky substrates use their introvert hooks, mostly at nighttime, to scrape sediment and epifaunal organisms from the surrounding rock surface to eat.  Finally One species, the large Thysanocardia procera is thought to be carnivorous but scientific evidence for this is lacking

Most species of the phylum sipuncula are dioecious (adults are either male or female). One species, Nephasoma minutum, is known to be hermaphroditic and Themiste lageniformes is facultatively parthenogenetic. Asexual reproduction by budding has been recorded in one species, Aspidosiphon elegans.

There is no external morphological difference between males and females. Gonads are only prevalent during the reproductive period. Gametes are released into the coelom where they develop. Mature gametes are taken up by the nephridia and released into the water through the paired nephridiopores.  Fertilization is external.

Development of the fertilized eggs can be either direct or indirect. When indirect the larva that first develops is called a lecithotrophic trochophore larva, in some cases this this is followed by a pelagic pelagosphera larva.  This pelagosphera larva can spend up to six months in the water column before settling.

Sipunculans are important to fishermen as bait animals in some parts of the world.   Humans have eaten these worms for centuries, which, in some cases can reach over half a meter in length in some larger specimens. Sipunculid worm jelly is a delicacy in the town of Xiamen in Fujian province of China.  Sipunculans are also eaten in Java, The Philippines and in Vietnam where they are often considered to be a delicacy

Currently (as of 2005) the phylum Sipuncula is divided into two classes, four orders and six families.  The number of species officially recognized is currently 205, but it is estimated 320 species have been discovered, time will tell if all these 98 other species really are new species.