Etymology: From the Greek Echinos for half, and Derma for skin.

As you can see from this list, they are a morphologically very diverse group.

At first it may not be obvious how they are all related, but despite their various forms they do all possess the characteristics outlined above. They are an ancient and very successful phylum of invertebrates with around 6,000 living members.

They are one of the best known and most loved groups of invertebrates. They are popular as symbols because of their unique shapes and beautiful colours.

Echinodermata are also one of the most evolutionarily advanced phyla, yet they are totally unique in many ways. They have evolved many morphological and physiological characteristics that set them apart from all the other phyla.

Although much research has been done on them, we are still a long way from really understanding them well. The echinoderms are, to express it simply, wonderfully attractive both aesthetically and intellectually.

Because of their calcareous skeleton, many echinoderms fossilize well and we have a good record of their evolutionary history derived from more than 20,000 fossil species.

They first evolved about 600 million years ago in the Precambrian, along with many of the other major phyla. The first echinoderms (called carpoids) did not have any radial symmetry which shows that this characteristic was acquired later in the group’s evolutionary history.

Echinoderms are often difficult animals to kill and many have well developed powers of regeneration. Early attempts to control the Crown-of-Thorns starfish by chopping it up into several pieces merely resulted in helping it disperse, as each piece grew into a new animal.

Echinoderms are protected from most predators by their spines. Nevertheless some are eaten by other echinoderms and some by human beings.

The gonads of Sea Urchins are eaten in several places around the world, both raw and cooked and are considered to be very tasty. Also, in Asia the body wall of certain Sea Cucumbers is eaten – this contains over 50% digestible protein so it is valuable nutrition wise, as well as tasty… it is called Trepang.

Starfish, or Sea Stars are often a pest of commercial clam and oyster beds.

A single Starfish my eat over a dozen oysters or young clams every day. The now infamous Crown-of-Thorns Starfish (Acanthaster planci) has caused serious damage to many coral reefs around the world. Most notably the Great Barrier Reef off Eastern Australia, though there is the possibility that it was human mediated interference in the marine ecosystem that allowed it to become a pest.

The Crown-of-Thorns Starfish is the only seriously venomous Starfish. Each of its spines is encased in a sheath which contains the venom. In coastal tourist zones, Starfish and Sea Urchin populations suffer because they are collected and dried to be sold as trinkets to the tourists.

It is better not to buy such things because as long as people keep buying them, ruthless people will continue to exterminate local populations for the sake of money.

In this modern world you would consider it uncivilised to buy a dead bird or an elephants foot as a holiday keepsake, so why buy a dead Echinoderm – or any other animal for that matter?

Echinoderms are all marine and nearly all are benthic, meaning they live on the sea floor.

No parasitic species of echinoderms are known. Though a number of species live commensally with other organisms such as fish, other echinoderms, polychaetes, molluscs, Platyhelminths, ctenophores and protozoa.

They are distinguished from the other phyla by several main characteristics.

Did you know there are Starfish in the Genus Pteraster that live off the Pacific coast of North America that secrete copious amounts of thick poisonous mucous whenever they are attacked by a predator?

They are called Slimestars and the poison in their mucous is a saponin. An individual Slimestar can secrete so much mucous its predator gets bogged down in it.

The body wall of echinoderms consists of three layers.

The outer layer, called the epidermis, is only a single layer of cells which covers the entire animal including its various spines.

The third layer is also a single layer of cells, the main difference being that these cells are ciliated. This layer encloses the the animal’s coelom, separating the animals guts from its skin. It is called the ‘coelomic lining’.

The middle layer is much thicker and is called the dermis. It is composed of connective tissue and contains the exoskeleton. This exoskeleton takes three different forms:

Whatever form they take, these plates or ossicles are always made from calcite – the ingredients for which are found in sea water.

The exoskeleton of echinoderms grows continuously throughout the animal’s life. Thus older animals are always larger than younger ones. The exoskeleton supports the spines, warts and tubercles that are often found on the echinoderm surface. These various protuberances are also generally made from calcite. 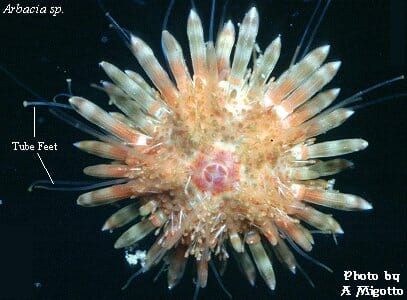 Apart from its skin – and/or its spines – an echinoderm also has contact with the external world through its water vascular system and the tube-feet that are a part of this system.

The water vascular system of the echinoderms is unique in the living world and easily distinguishes them from all other phyla.

The water vascular system starts with an opening to the external environment, called a madreporite.

From this, a short straight canal called the ‘stone canal’ leads to the ‘ring canal’. The ring canal is a ring – as might be expected – and it has five longitudinal canals branching off from it into each of the arms (or their morphological equivalents in Echinoidea and Holothuroidea).

In species with more than 5 arms, these canals branch out into each arm.

On each side of each canal there arises a series of short lateral canals that lead, via a valve, into the descending tube feet and the ampulla that operate them. The tube feet pass through small holes in the animal’s exoskeleton. Muscles around the ampulla (which remains inside the exoskeleton) squeeze water into them, causing them to extend or relax.

Echinoderms are either filter feeders, substrate eaters or carnivores.

Many Echinoderms use their tube feet as organs for gaseous exchange, but others such as the Ophiuroidea and the Holothuroidea have additional special sites or organs of respiration.

Fertilisation is always external and the larvae are planktonic and biradial. They develop the pentaradial symmetry of the adult forms later on.

The Echinoderms are a very diverse group and I shall look at the ecology and biology of the 4 extant classes separately. The phylum is divided into 4 subphyla and 16 classes, of which 12 are now extinct.

Well, I hope you have learned a little about the wonderful world of Echinoderms!

Perhaps now you’d be keen to learn about lancelets.