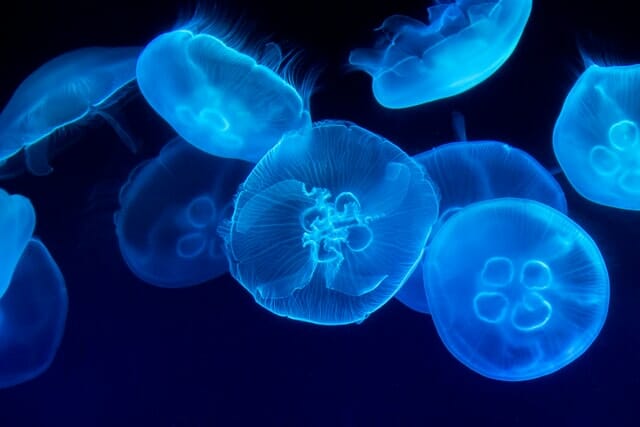 Jellyfish. An ancient, sea dwelling, ‘stinging machine’ located in the majority of the worlds waters, in infinite numbers, have no brain or heart to keep them alive…true or false?

TRUE! Jellyfish have no brains but don’t worry, we’ll explain all about their unbelievable nervous systems and anatomy later. Let’s start with understanding what they are and where they’ve come from first.

Often signified as ‘floating plastic bags’, jellyfish are umbrella shaped invertebrates with lots of tentacles lined with stinging cells. There are estimated to be up to 200 sub-species of these free-swimming sea animals. The majority of jellyfish range from 3 to 30cm in diameter but some grow to be a lot larger, 2 meters in length to be exact. The Aurelia Aurita is the most common species of jellyfish, otherwise known as the moon jelly and is harmless to humans. Although jellyfish as a species have been around for millions and millions of years, their individual lifespans are only between one and three.

Within the Kingdom Animalia and covering a large proportion of the phylum Cnidaria, the word ‘jellyfish’ is a common name for gelatinous members of the subphylum Medusozoa. This marine animal largely belongs to the Scyphozoa class and are otherwise known as ‘true jellyfish’ (Greenspan and Katsuki, 2013). However, no matter their size, differing salt or freshwater habitats or class, one thing remains the same. Their absence of a physical brain or heart. 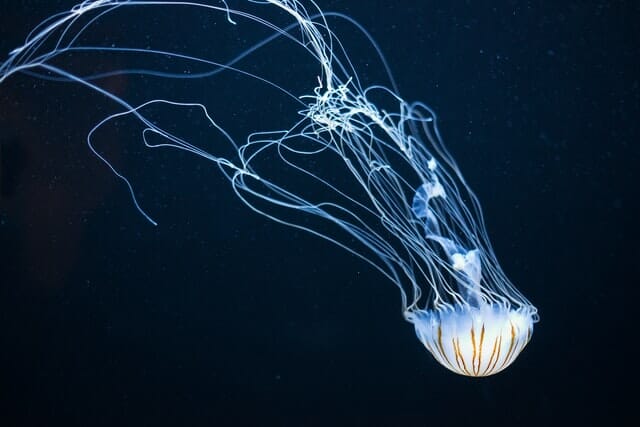 Do dinosaurs still exist? No. But, jellyfish do and they’re pretty similar. These mysterious looking creatures are known to have survived the earths five mass extinction events and date back to the time dinosaurs ruled the earth over 500 million years ago. Being so ancient, jellyfish have evolved to not have organs that other animals and us humans rely on so heavily. So, how in the name of David Attenborough do these animals survive?

Yes, jellyfish take advantage of the ocean currents to move around but they do respond to the world around them as well. Oh, and they only have one opening on their body that they use to eat, reproduce and dispose of waste. But how do they coordinate this? Do jellyfish have brains or not? Well, although they do not have the classic layout of a heart pumping oxygenated blood around their body and a brain being their sole control mechanism, they do have body parts that perform the same functions.

Do jellyfish have brains?

No, I repeat, jellyfish do not have a singular brain. Instead, they have survived for over 500 million years with a radially distributed nervous system that is adapted to their very unique body structures. Scientists are to this day still trying to understand why the Scyphozoan taxonomic class of jellyfish evolved without a brain when their ancestors diverged off onto one side of the evolutionary tree to develop a centralized nervous system. I guess that’s why you’re here reading this right now.

Even though their phylogenetic position and divergence is not fully understood, scientific studies suggest Cnidarians are in fact our most distant homologous, neuron based, relative. So, we’ve answered the question, ‘Do jellyfish have brains?’, but now it’s time to understand how they function without one. 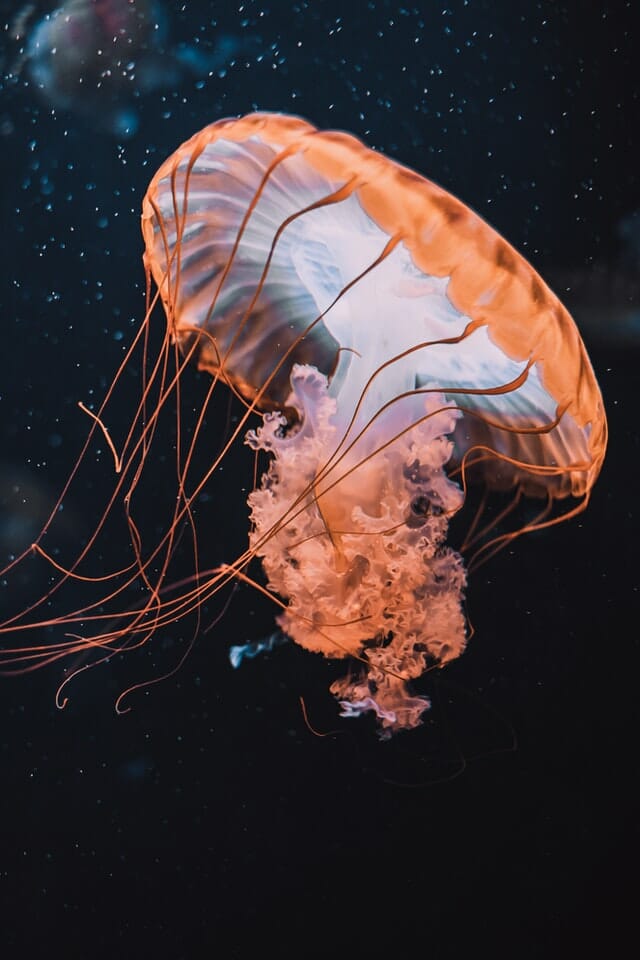 1. A large motor nerve net that enables them to swim

If you have ever seen a jellyfish pulsing through the water, you’ve watched their large motor nerve net in action. In order for a jellyfish to swim a motor nerve net and diffuse nerve net are said to directly activate and control the fast and slow movements in the water in response to chemical impulses to their pacemakers. Jellyfish may lack a physical heart but this hefty nerve net sure makes up for it (Greenspan and Katsuki, 2013).

The motor nerve net is found across the sub-umbrella muscle, constructed of widespread inter-neuronal communication (Satterlie, 2011). When the motor nerve net is stimulated a wave of activation spreads over the entire umbrella. The conduction speed of this action is calculated to be about 45cm/s, creating a fast contraction in the jellyfish’s swim musculature.

This nerve net itself is constructed of symmetrical and chemical synapses whereby the synaptic cleft contains vesicles as well as receptors (Horridge and Mackay, 1962). Due to the synapses being bidirectional, the transmission of excitation is non-polarized. This allows for through-conduction across the entire nerve net, producing synchronized contractions of the jellyfish’s swimming muscles (Greenspan and Katsuki, 2013).

The smaller diffuse nerve net is activated by the rhopalium when jellyfish respond to sensory stimuli and controls all non-swimming behaviours. This part of the nervous system is said to aid and support the main functions of the motor nerve net and influence is circular muscles (Pallasdies et al, 2019). Specifically, the diffuse nerve net stimulates tentacle contraction and other modulatory responses sent to jellyfish musculature. Such controlled responses allow jellyfish to differentiate between its tentacles and perform individual, smaller, movements such as holding prey with their tentacles and mating (Greenspan and Katsuki, 2013).

On the edge of bell margins, (otherwise known as the belly of the jellyfish), lie the previously mentioned rhopalia structures. The topside of the finger stands up toward the aboral surface while the inside of it faces down toward the oral surface (Helm, 2018).  Each section of the rhopalium has its own number of neurons that detect different things.

If anyone ever asks you, ‘Do jellyfish have brains?’, you should simply respond, ‘No, BUT they do have rhopalia’. Otherwise described as finger like sensory projections, these structures take on a role that is similar to our cerebellum in our human brains, located along the lower edge of the bell of jellyfish. The rhopalia are said to act as pacemakers that aid jellyfish movement and balance. Rhopalia are also known for allowing jellyfish to detect light via photosensitive structures called ocelli and contain crystals that allow them to know if they are upside down or not. The moon jellyfish (Aurelia aurita) specifically relies upon ocelli to detect light and the Tripedalia cytophora use them to detect if they are moving toward their desired mangrove habitats (Greenspan and Katsuki, 2013).

Who needs a brain when you have rhopalia to act as little servers within a wide spread computer network.

Aside from nerve nets, some species of jellyfish such as the hydromedusae, have inner and outer nerve rings that surround the bell margin of the animal. These nerve rings are specifically constructed of parallel neuronal pathways that react to touch, gravity and light (Garm et al, 2007). The Aglantha digitale Hydrozoa species has been found to have 14 or more physiologically distinguishing pathways in its nerve rings (Mackie, 2004). Within this species of jellyfish, instead of chemical impulses, electrical impulses run up both radially and laterally along the sub-umbrella. This further proves the vast neuronal amalgamations shown by jellyfish of differing species and their intricate ability to survive without a physical brain (Greenspan and Katsuki, 2013).

Apart from ‘remarkable’, to choose another word to describe the ability of jellyfish to thrive without a brain, perhaps ‘resilient’ is best. Do jellyfish have brains? Well, whether you find it hard to comprehend and believe, it is clear that jellyfish prosper without either a heart or brain and have done successfully through differing environmental conditions for millions of years. In evolutionary terms, they are termed ‘fit’ and have a lot more to teach us about nervous system anatomy and existence.

Founder of Re-Educating Earthlings environmental education platform | Children's Author | Freelance environmental writer | 'No one can do everything, but, someone can do something'. LinkedIn Profile.

1 thought on “Jellyfish survive (& thrive) without a brain or heart – here’s how!”