Mayflies (Ephemeroptera) are common insects found in almost all freshwater habitats, as well as some brackish ones. There are over 2,000 named species in 200 genera and 19 families.

The adults are soft bodied insects with very short antennae, vestigial mouthparts, two long cerci and usually a long caudal filament at the end of the abdomen. Most adult Mayflies have two pairs of wings however the second pair are considerably smaller than the first and in some species are absent altogether. Nymphs have much longer antennae, functioning mouthparts and are aquatic.

Ephemeroptera date from the Carboniferous and Permian times and are the oldest of the extant (still living) winged insects, they are unique in being the only insect order to have a subimago (last non-adult life stage) with wings.

Adult Mayflies do not feed and live very short lives. Many species live only for one or two days, but in others the adult life span may be as short as 2 hours or as long as 14 days. Nymphal life cycles can range between 3-4 weeks to 2.5 years, depending on the species.

Mayflies can be easily recognised because they are the only order of insects to hold their wings pointing straight up, they can not fold them down. They generally hold their abdomen curved upwards away from the substrate (what ever they are standing on).

Mayflies have attracted man’s attention for a long time and one of the oldest accounts of Ephemeroptera biology was published by Swammerdam in 1675. It is an unfortunate fact that the genus of Mayflies studied by Swammerdam Palingenia sp. is now extinct in the Netherlands and the rest of Western Europe – a consequence of the Mayfly’s general low tolerance for pollution.

In most species of Ephemeroptera the female lays her eggs a few at a time into the water, by dipping her abdomen into the water while in flight. However some species lay all their eggs at one go, some stand on a rock or stone to oviposit (lay eggs). Some species of Baetis actually climb under the water to find a suitable place to secrete their eggs.

In most species the female lays between 500 and 3,000 eggs but some species of Palingenia can produce as many 12,000.

The eggs can hatch immediately or wait up to 11 months depending on the species and habitat, with tropical species tending to have shorter life cycles and need less time for the eggs to mature or to wait for an optimum temperature or season. When a Mayfly nymph first hatches it is less than 1mm long and generally missing the middle tail.

Mayfly larvae are called nymphs and generally have 3 tails, gills on their abdomen and only one claw on each leg. Mayfly nymphs may go through as many as 50 instars (i.e. may moult 50 times) in some species, though less is more usual.

They breath through their gills which are usually on the abdomen, but which may be at the base of their coxa.

In many species, the gills are moveable and may be vibrated in order to increase the amount of water moving over them (this is the equivalent of you panting when you are short of oxygen). They may also be used as swimming paddles in some species.

Many nymphs, particularly smaller ones, live among the aquatic vegetation i.e Cloeon dipterum. But some species make small |___| shaped burrows in the substrate to live in i.e. Ephemera danica. While others are dorsventrally flattened to allow them to live clinging on to the underside of rocks, in fast flowing streams i.e. Rhithrogena semicolorata.

Most Mayfly nymphs are herbivores, feeding on algae and diatoms and/or are detritivores feeding on detritus (dead and decaying material). Some species are collectors, filter feeding on floating material, while others are scrapers – actively removing plant material from the rocks.

Their are some omnivorous species in the genera: Isonychia, Siphlonurus and Stenonema. There are even some carnivores in the genera: Dolania, Spinadis and Raptobaetopus, of which the first 2 at least feed on Chironimid larvae.

Some Mayfly larvae have symbiotic relationships with other animals i.e. Ephemera danica and the larva of the Chironomid Epoicocladius flavens, which lives on the Mayfly larvae’s body and may improve its respiration through its cleaning activities. There is also Symbiocloeon heardi which lives a commensal existance in the gills of a freshwater Mussel in Thailand.

Adults or Imago and Subimago 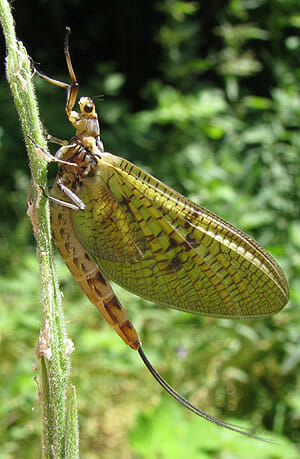 In temperate regions, Mayflies usually emerge at dusk – but may emerge at dawn i.e. Caenidae or at midday, i.e. Baetis and Leptophlebia sp. Emergence may occur onto the shore or a piece of vegetation, particularly vegetation which reaches the surface of the water away from the bank. In Arctic and Temperate regions emergence is restricted to summer, though in warmer climes emergence of Mayflies can occur all through the year. However, individual species will use only 1 or 2 months of each year for emergence.

Emergence may also be rhythmical i.e. Povilla adusta, which exhibits lunar rhythm to its emergence in several African lakes. Males and females tend to emerge at the same time

The creature that emerges has wings and looks very much like an adult. It is called a ‘subimago‘ and it lives only long enough to harden off its skin and fly to a nearby tree; where it will moult again, this time into a true adult. The subimago is distinguished from the adult by the presence of microtrichia (very very small hairs) on the wings. These are never present in the true adult. Besides this, the true adult is generally slightly larger, has longer legs and tails and is brighter in colour.

This is reflected in the names fishermen have for the two forms; the adult or imago is known as the ‘Spinner’, while the subimago is called the ‘Dun’. i.e. Paraleptophlebia cincta is the Purple spinner and the Purple dun respectively.

Fishermen do give some Mayflies other names, such as ‘Angler`s curse’ which is applied to all the members of the genus Caenis in Britain.

Once mature, male Mayflies swarm. Generally over water, though not always so – and generally at dusk. Female Mayflies then visit the swarm and choose a male, having made her choice she then leaves with him to mate.

Most Mayflies have the normal two sexes, but parthenogenesis (where females lay unfertilsed eggs which hatch into more females) is known from a few species, i.e. Ameletus ludens, Baetis hageni, Baetis macdunnoughi and Cloeon triangulifera from North America and Caenis cuniana from South America.

Well, I hope you have found this introduction to the order ephemeroptera interesting.

Don’t forget to check out Mayfly Central for all the latest mayfly news!

Oh, and perhaps now you’d be curious to learn a little about spingtails.