The insect head is sometimes referred to as the head-capsule and is the insect’s feeding and sensory centre. It supports the eyes, antennae and and jaws of the insect

The upper-mid portion of an insect’s face is called the ‘frons’; below this is the ‘clypeus’ and below this the ‘labrum’; to either side of which, may be seen the edges of the ‘mandibles’.

In some insects various aspects of the ‘maxilliary palps’ may extend beyond and/or below these, even when viewed from front on.

The rest of the front of the head: that bit which is above the frons is known as the ‘vertex’; the sides of the head are known as the ‘gena’. For a more detailed, lateral (side) view of the insect head see below: 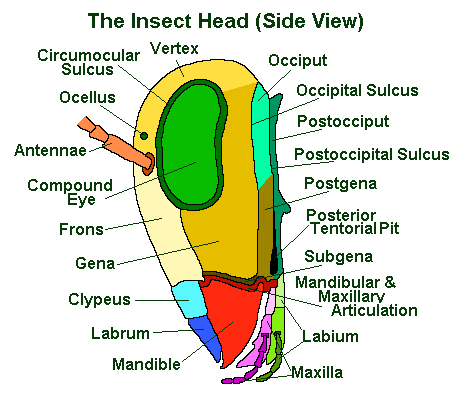 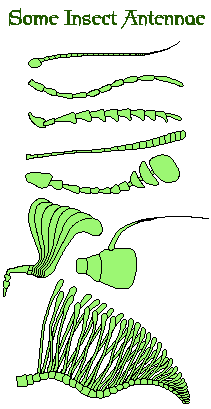 The antennae are an insect’s primary, non-visual, sense organs. Though in a few rare instances, they have become adapted for other purposes such as seizing prey items. I.e. the larva of Chaoborus sp. (Diptera) or holding female’s during mating, as in the males of Meloe sp. (Coleoptera).

Not all insects possess antennae, they are absent from the Protura.

In most insects, the antennae possesses a mechanosensory organ on the pedicel (the second antennal segment) called ‘Johnston’s organ‘ and, normally, only the basal antennal segment contains intrinsic muscles.

However, in two orders (Diplura and Collembola), the antennae lack a ‘Johnston’s organ’ and all but the last segment contains intrinsic muscles. This allows far greater controlled movement of the antennae, as is demonstrated by the rolling and unrolling of the antennae observed in the Collembola Tomocerus longicornus

Insect antennae come in a wide variety of shapes and sizes.

Generally the first segment is known as the ‘scape’, second segment as the ‘pedicel’ and the rest as the flagellum. It is quite usual that the males of a species have more elaborate antennae than the females. This is because it is normally the males who have to find the females.

The greater the surface area of the antennae, the more dilute scents they can detect. Thus male insects with feathery antennae – such as those seen in many moths – are far more sensitive than the purely filamentous ones of crickets and cockroaches.

Though some species of insects have been shown to be able respond to light stimulus through their cuticle, most light sensitivity occurs through one or more eyes. Insects possess two different sorts of eyes: the usually large and obviously visible ‘compound eyes’, and two varieties of ocelli or ‘simple eyes’.

Compound eyes are so named because the cornea is composed of a number of individual facets or lenses (called ommatidia), rather than a single lens as in ocelli (or our own eyes).

The number of separate visual elements, or ommatidia, varies greatly between species – as well as between the larger taxa. So that while worker ants of different species may have between 1 (Ponera punctatissima) and 600 ommatidia per single eye, adult male Odonata may have more than 28,000 per single eye.

This creates a considerable difference in the presentation of light stimulus to the insect brain. However, the ability of insects to navigate the world by means of visual stimuli suggest that they have overcome the problems inherent in this multi-faceted perception. The physical differences between single-lens and multi-lens perception are excellently shown at the Bee Keepers Home Page in the section on “the world through the eye of a bee”.

Much like our eyes, insect eyes, can be divided into four basic parts:

In the compound eyes of insects, these parts are repeated numerous times side-by-side in a space saving hexagonal pattern. See above.

The lens is formed by a transparent and colourless cuticle and it is usually biconvex. Beneath this is the crystalline cone (which is comprised of four cells called ‘Semper cells‘ after the man who first described them). Normally this functions as a secondary lens.

The receptive parts of an insect’s eye are the ‘retinula cells’.

Each ommatidium normally has eight retinula cells, arranged to leave a central core space in the centre of the ommatidium; into which each retinula cell projects a series of microvilli (like very small fingers). These microvilli are the actual light detecting part of the cells and are collectively referred to as the rhabdomere (think cornea). The eight (or occasionally 7 or 9) rhabdomeres (sets of microvilli) form a rhabdom.

The retinula cells are connected to axons at the base of the eye. It is these which carry the information collected by the lenses and converted into electrical impulses by the rhabdom to the brain, thus allowing the insect to see. 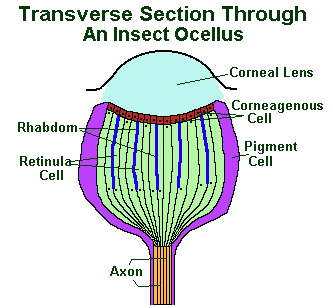 Ocelli are present in most insects to some degree, though as with all aspects of insect anatomy there is a great deal of variety in form and even in relative function.

Generally they consist of five separate parts the ‘cornea’, the ‘corneagen layer’, the ‘retina’, the ‘pigment cells’, and the ‘central nervous connections’.

The function of the corneal lens is obscure. Although it does project an image into the ocellus, this image forms below the level of the light-sensitive cells, or rhabdom. Therefore the ocellus can generate no image information. However it is very sensitive to low levels of light and to changes in light intensity; scientists believe that the ocelli are useful in allowing the insect to detect the horizon, to respond quickly to changes in light intensity.

Two different forms of ocelli have been described for insects, Dorsal ocelli and Lateral ocelli.

Dorsal ocelli occur mostly in adult insects and are situated on the front of the insect’s face in the area of the ‘frons’ and/or the ‘epicranium’. Lateral ocelli generally occur on the sides of the insect head and are the form of eye most common in larval forms. There are a number of concrete differences between the two forms which can be be found explained in any competent entomological text book such as Imm’s 1984.

Most insects communicate using smell or chemoreception – and it is not surprising that they have evolved a large variety of ways of detecting the molecules involved.

Insects do not have noses like us, which concentrate all our sense of smell in one place. Instead they have a lot of small sensory bodies scattered over their body, though they tend to have a concentration of them on their antennae.

We can recognise several different common forms of chemoreceptor, though these are not the only forms they can take by any means:

In the primitive form, the insect mouth articulates (moves) from side-to-side in a horizontal plane, rather than vertically as do ours. In those groups of insects that evolved later, the basic mouthparts shown below have become highly modified.

In the butterflies and moths they are transformed into a long flexible straw. In the blood and sap sucking insects of various orders, they have become a hypodermic needle. And in most of the flies you see from day to day, they evolved into a extensible and highly effective sponge. 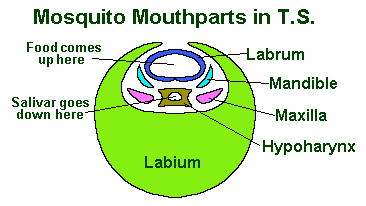 However in all these cases, all (or most) of the basic parts are still there. See the tranverse section of the needle-like mouth of the mosquito to the right as an example.

The Insect mouth consists of a number of mouthparts which, starting from the foremost, are called:

The Labrum is normally a simple structure that is equivalent to the insect’s upper lip and is generally moveable. It articulates with the clypeus by means of the ‘clypeolabral suture’.

The mandibles, with the maxillae, the labial palps and – in some species – the hypopharynx, constitute the moveable aspects of the insect mouth. The mandibles and the maxillae are the equivalent of jaws, with the exception that they move transversely (from side to side).

The mandibles show great variety within the insect orders and, like our more familiar teeth, they are hard and show variation in accordance with diet. Thus they are sharp edged in carnivores, extremely sickle-like in the ant Aceton burchelli, whilst being adapted for crushing and chewing in herbivores.

They have become a secondary sexual characteristic and are extremely large in some Beetles (i.e. in the genus Chiasognathus and Lucanus – Stag Beetles).

Mandibles are are used not only for feeding but also for attack and defence. Becoming extremely exaggerated in various species of termites ants (i.e. Atta texanus); and for manipulation of materials, as in the nest building insects, particularly the Hymenopteran Bees, Ants and Wasps.

The maxillae are a pair of modified limbs which work behind the mandibles and in front of the labium as a pair of accessory jaws. They are composed of the following parts: 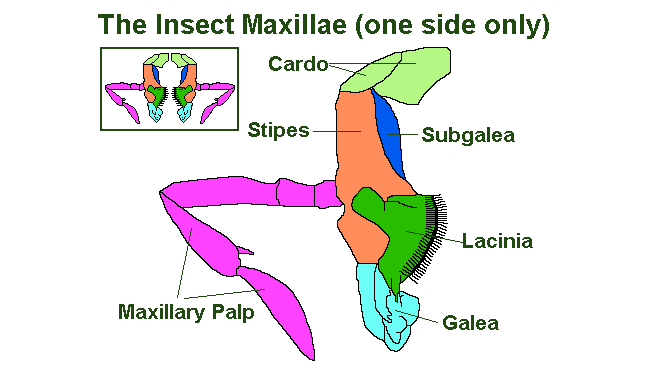 The Labium results from the fusion of a pair of limbs and serves a purpose similar to our lower lip for the insects.

The main body of the labium is divided into three parts: the central ‘mentum’ which is boarded on either side by the ‘submentum’ proximally, which hinges with the insect’s head, and the prementum distally. The prementum supports two pairs of lobes known as the ‘glossae’, to the outside of them the ‘paraglossae’, and a pair of labial palps which are primarily sensory in function.

The glossae and paraglossae may be fused, with one or the other considerably reduced – in which case the whole thing is known as the ‘ligula’.

The hyper-pharynx or tongue is found behind the mouth and has the salivary ducts at its base. In most Diptera (true flies) and Hemiptera (true bugs) it has become highly modified and serves as the main feeding organ, in many cases combining with the rest of the mouthparts to form a stylette or piercing organ.

Well, I hope you have learned a little about the myriad of wonders contained in the insect head!

Perhaps now you’d like to find out about insect legs or the insect digestive system.

2 thoughts on “The Insect Head: Guide To The Antennae, Eyes & Mouthparts”