Just like you and me, fish need a constant supply of oxygen in the form of O2 in order to run their metabolism.

Without oxygen, they can’t turn their food into energy or make any new fish body. All the free oxygen on this planet was, or is, being released into the air by plants. The atmosphere at the moment is about 21% O2.

However oxygen will dissolve in water, in a similar sort of way that the bubbles in your Coca Cola are dissolved into the liquid (which is mostly water) that makes up the drink.

Fish could, of course, breathe air like Seals and Whales (and some do) but if they wish to stay safe under the water for longer periods of time, it would be much easier if they could get the oxygen they need from the water – and this is exactly what they do. In fact they were doing this long before any vertebrate animals learned how to breath the air. 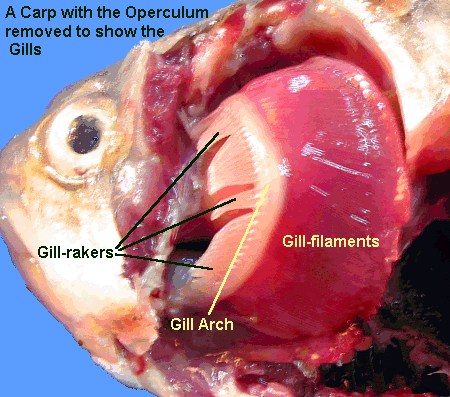 So fish live in the water and they breathe the water. To do this they have special organs called gills.

Gills are wonderfully well designed and they have to be because – although the water does hold some oxygen – it never holds any where near as much as the air.

To make things more difficult, the amount of oxygen a body of water can hold decreases the warmer it becomes. Also, salt water holds less oxygen than fresh water. If the air above a body of water is 21% O2, this means that 210 parts per thousand are O2. But if we do the math for one of the figures below, such as cold salt water, we see that it contains only 7.58 parts per thousand O2.

Fish solve the problems of extracting the O2 they need from the water they live in, in a variety of ways.

Firstly they have different life styles. Obviously, a fish that spends most of its life resting on the bottom of the ocean waiting for its dinner to swim by needs less O2 than a fish which actively chases smaller fish for its dinner. However most of the problem is solved in the design of the gills. 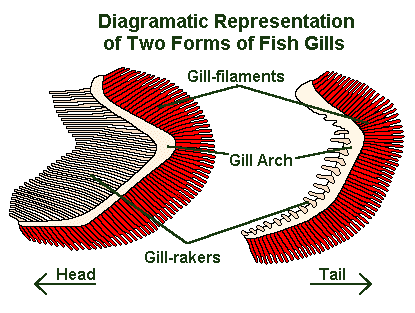 A fish’s gills are situated one set on either side of the body and near the back of the head. They are open to the gullet at the front and open to the external environment behind.

They are designed so that water can flow continually passed them, coming in through the mouth (and/or the spiracle in sharks and their allies) and passing out through the single external gill opening in fish (or through one of the 5 to 7 gill clefts in sharks and rays).

In fish there is a bony plate protecting the gills. This is called the operculum and it is hinged and has muscles attached to it, so it can be regularly opened and closed.

This ability to have water continually passing over the gills is one of the major factors making gills more efficient than lungs.

With lungs, the air comes in, fills the space and then has to be expelled before any more O2 rich air can be brought in. With gills, there is no time wasted getting rid of the old air/water and no energy wasted reversing the direction of the flow.. 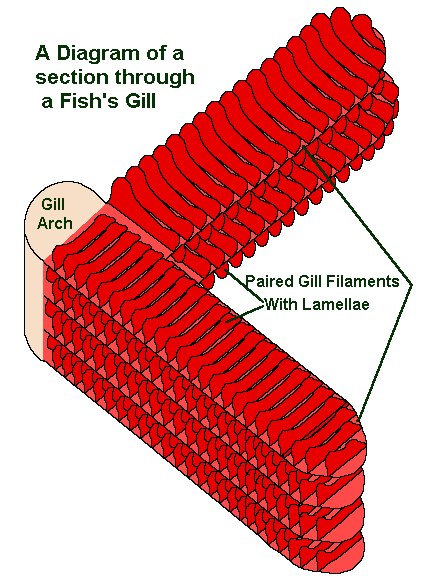 It’s here, in the lamellae, that the uptake of O2 actually occurs.

The lamellae are very fine structures, however their exact dimensions depend on the normal activity levels of the fish in question. The more active the fish, the thinner they are and the less distance there is between them. Also the absolute thickness of the individual lamellae walls varies.

This is important in considering the facility with which O2 can diffuse from the water to the fish’s blood.

The thinner the membrane, the more quickly and easily the O2 can pass across it.

Thus, in sluggish fish like the American Brown Bullhead (Amerius nebulosus), the lamellae are 25 µ thick, 45 µ apart and the lamellae walls are 10 µ thick – giving you 14 lamellae per mm.

Whereas, in a highly active fish such as the Atlantic Herring (Clupea harengus), the lamellae are 7µ thick, 20 µ apart and the lamellae walls are >1µ in width – giving you 32 lamellae per mm.

The presence of all these lamellae greatly increases the surface area of the gills, meaning that a large amount of water is available for gaseous exchange at any particular moment of time.

In active fish, such as the Atlantic Mackerel (Scomber scombrus), which has nearly the same gill dimensions as the Atlantic Herring, there may be as much as 1,000 square mm of lamellae surface for every gram of body weight. Such a fish weighing 1 kg will have approximately 1 square metre of gill surface area.

Having such a large amount of gill area obviously helps the fish in its battle to extract enough O2 from the water it lives in. 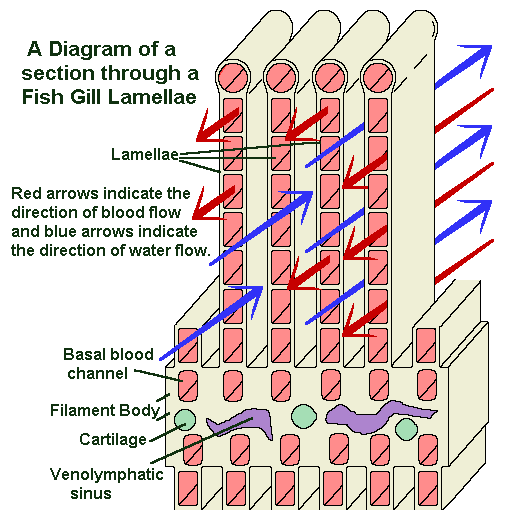 The Lamellae are basically collections of blood vessels sandwiched between two sets of membranes.

The membranes keep the blood and the water separate whilst allowing the dissolved gases, O2 and CO2, to diffuse naturally from one liquid to the other… depending on which has the greater concentration of either gas.

The laws of physics compel gases to seek equilibrium. If you have different concentrations of a particular gas on either side of a permeable membrane (i.e. a membrane that very small gas molecules can pass through, but not larger organic molecules) the the gas will move from the side with the greater concentration to the other, without you having to do anything.

To ensure a continuous gradient of gaseous difference between its blood and the water flowing past its gills, fish use a counter-current system.

How Do Gills Work (The Counter Current System)

This means that the blood flows along the vessels in the lamellae in the opposite direction to which the water is passing on the outside of the lamellae.

While it may not seem entirely intuitive that a counter-current system is much more effective than a system in which the both fluids flow side-by-side in the same direction, scientists have tested the system by artificially controlling the water flow and they have found that it is in fact five times more efficient.

The system works because the blood enters the gills as the water is leaving them.

Thus, the difference remains, and O2 moves out of the water and into the blood during the whole operation.

Fish can breathe the water by swimming forwards and letting some of the passing water flow in through the mouth, across the gills, and then out. They can control the amount of blood flowing through their gills, increasing the amount of oxygen they take from the water if they are being more active.

When they are moving slowly, or resting in the water, fish can breathe the water by synchronously expanding and contracting the buccal cavity (the mouth and throat) and the opercular cavity (which is the space behind the operculum where the gills are).

In doing this they can pump a continuous stream of water across their gills.

Sharks do not have an operculum, or an opercular cavity, but have instead a branchial cavity and a series of branchial flaps (one for each set of gills, but which work in a similar way).

Sharks also have a pair of spiracles in front of their gills (one on each side). They can pump water in through these spiracles and over their gills. In those species of Sharks and Rays which often – or even habitually – rest on the sea floor, these spiracles are on the top of the animal’s head. This allows it to breathe without sucking in sand, which would damage the delicate gills.

Most fish can also absorb some O2 through their skin and while they are in their larval form, this is often the main source of respiration.

The smaller a fish, the higher its ratio of skin to body mass. However, as it grows, it increases its mass much faster than its surface area and soon the skin is not able to take in all the O2 the body needs. So other forms of respiration/gaseous exchange then take precedence.

But in some fish scientists have learned that the skin continues to take up O2 throughout the animal’s adult life. Although the O2 taken up is only used by the skin and not passed on to the muscles. Two examples of this are the Crucian Carp (Carassius carassius) and the Yellow Perch (Perca fluviatilis).

In adult fish, only the Scaleless Black Bullhead uses its skin to take up O2 for the body. In this species, about 5% of the total gaseous exchange occurs through the skin.

Well, I hope you have enjoyed learning about the fish’s respiratory system and how gills work!

Perhaps now you’d like to know more about fish scales.

2 thoughts on “Gills 101: The Magic Of How Fish Breath – Explained”