As in other vertebrates, the circulatory system of fish is comprised of both static and dynamic components.

The dynamic part is the blood, with all its constituent parts that flows continuously around the fish’s body. The static parts are the heart, the veins and arteries leading to and from it – and the capillaries that connect them.

Fish have less blood per gram of body weight than mammals, normally between 3% and 8% of a fish’s body weight is blood. However in the hagfish and lampreys it is greater, for them between 8% and 20% of the animal’s body weight.

The blood of fish consists of plasma and the various cells that move around the body in it: erythrocytes and leukocytes. Plasma is basically water with a variety of ions (Na+, Ca2+, K+) and small organic molecules such as urea, sugars and fatty acids dissolved in it.

Erythrocytes are by far the most common cells found in the blood plasma and their job is to move gases around the body. They collect oxygen at the gills and carry it to all the cells of the body… and from these same cells they collect carbon dioxide which they release into the external waters through the gills.

The molecule that allows the erythrocytes to do their job – and which makes them red – is called haemoglobin or hemoglobin, and erythrocytes are full of it. The haemoglobin of hagfish and lampreys is called monomeric and consists of a single large haem-molecule with a molecular weight of around 17,000 daltons.

Most other fish have tetrameric haemoglobin, which is built up from from four different protein chains called alpha and beta chains – there are two of each in a single haemoglobin molecule. This type of haemoglobin is very similar to ours and has a molecular weight of around 65,000 daltons.

Leucocytes are a mixed collection of cells that are united in being much less common that erythrocytes and in not being red (because they do not contain haemoglobin).

The five most important types of fish blood cells are as follows:

There are always exceptions… this is part of the beauty of life on earth.

The Icefish of the Antarctic such as Pseudochaenichthys georgianus have no haemoglobin in their blood and rely on gases dissolved in the plasma. This helps them become invisible, or at least harder to see.

They can survive like this firstly because they live in very cold water. Cold water has a higher content of dissolved oxygen than warm water. Secondly, they live fairly inactive lives so their oxygen requirements are low – their food is plentiful and easy to catch. 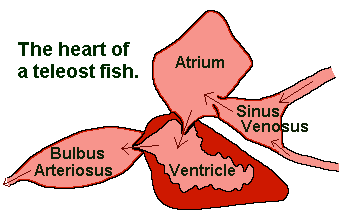 At the centre of the static (comparatively) parts of the fish circulatory system is the fish’s heart, which is normally situated below the pharynx and immediately behind the gills.

A fish’s heart has four chambers. But unlike us, the chambers of their heart are not all muscular and are not so built into a single organ. Rather they are located one behind the other. This is particularly evident in the sharks and rays. 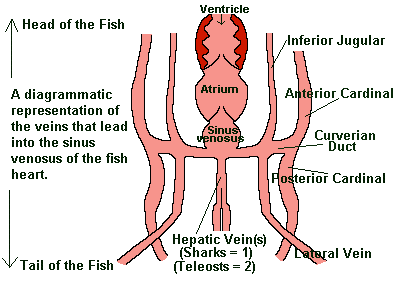 Sinus venosus. The first chamber is called the sinus venosus. It is the preliminary collecting chamber. In teleosts, it is filled from two major veins called the hepatic veins and the left and right branches of the Curvierian ducts – which in turn collect blood from the paired (left and right) lateral veins, the inferior jugulars, the anterior cardinals and the posterior cardinals. However in the elasmobranchs only one hepatic vein leads into it.

Atrium. From the sinus venosus the blood flows into the atrium. The atrium is the largest of the chambers in the fish heart and only weakly muscular. It pushes the blood, with weak contractions in the ventricle.

Ventricle. The ventricle is the only well muscled chamber, nearly as large as the atrium. It is the work horse of the heart – its contractions drive the blood around the body.

Both are alike in being primarily elastic and work to reduce the pulsed nature of the blood leaving the ventricle – giving it a more even, constant flow.

From the arteriosus, the blood enters the ventral artery which takes it to the gills, where it loses CO2 and gains O2 before heading out to the body through the dorsal artery.

Various branch arteries supply the muscles and different organs of the body through a network of ever finer capillaries. Further capillaries take the blood, now low in O2 and higher in CO2, into a series of veins that ultimately join up with the major veins mentioned above: the hepatic veins, lateral veins, inferior jugulars, anterior cardinals and posterior cardinals.

Not all the plasma of fish blood returns through the capillaries. Some of it mixes in with the fluid that surrounds the cells of every tissue and is eventually drained away into the lymphatic vessels.

This secondary circulation of lymph vessels eventually empties into the main blood veins. However because it left the main circulatory system, it is unaffected by the beating of the heart and its flow is slow.

In some fish it is helped along by small lymph hearts, muscular valved tubes which help express the fish’s blood into the veins. Lymphatic hearts can be found in various places, in those species that have them. The Eel (Anguila anguila) has one lymphatic heart situated in its tail.

Well, I hope this has been an interesting explanation of the fish circulatory system and how the fish’s heart works.

We have a lot more articles on fish anatomy here on the Earthlife Web – you can find them here.

1 thought on “Fish Circulatory System 101: How The Heart & Blood Work”