There are just over six hundred different sorts of spider in the British Isles.

But of these, only a handful are commonly found in houses.

But before we take a deeper look at the most common house spiders, we’ll first take a very brief look at the spider anatomy. This will be very useful when trying to work out which spider that is in your bath!

Spiders have a separate head and body, which are joined by a narrow waist. Attached to the side of the head are eight legs, which the spider uses for walking. At the front of the head are a pair of what appear to be small legs. These are called palps and are used to guide food to the spider’s mouth.

The front of the head also has a group of six or eight eyes. On the underside of the body at the rear, are four or six small conical bumps or cylinders. These are the spinnerets from which the spider produces the silk to make its webs.

House Spiders can be tricky to catch, so before starting make sure that you have some small tubes to catch them in and a glass jar in which to observe them. The plastic tubes that 35mm films come in are ideal, especially the transparent ones.

A magnifying glass or hand lens is also useful for looking at the spiders once they have been caught. The time to hunt for spiders indoors is the evening and the best place to start is the “cupboard under the stairs”.

Try any dark, out of the way place – like behind sideboards or wardrobes. The best way is to wait for the spiders to come to you. Have a tube and jar ready all the time, then when a spider appears it can be caught and popped into the jar to be examined.

Having caught a spider, go through the pictures until you find one that matches. Don’t forget to let the spider go when you have finished looking at it!

Telling male and female house spiders apart is easily done by looking at their palps. Males have swollen ends to their palps, which makes them look as if they are wearing boxing gloves – these are often strange shapes if looked at with a hand lens. Females have normal looking palps that are not swollen at the ends. 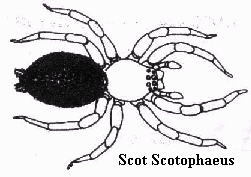 Scot is about a centimetre long. His head and legs are brown but his body is covered in silky grey hairs. It is this furry appearance that gives him the name of the Mouse Spider. He spends the day hiding in nooks and crannies coming out at night to hunt for food. Scot will try to eat anything, but if he makes a mistakes and takes on something too big, he runs away frantically waving his spinnerets from side to side. This leaves a trail of silken threads in the air which trip up whoever is chasing him. 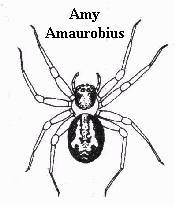 Amy lives in holes in walls, but unlike Sue Segestria (see below) weaves an untidy mesh web around the entrance of her hole. Amy’s webs are always very obvious as they have a blue tinge to them. The silk Amy uses is very different to that of other spiders, in that each thread is composed of many fine strands. Insects that wander into Amy’s web get these fine strands caught around the spines on their legs and become trapped. Amy then rushes out of her hole and whisks them inside to eat. 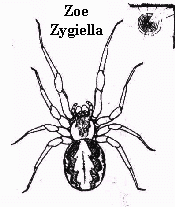 Zoe grows to half a centimetre long, her head and legs are brown while her body has a silver grey pattern with dark markings on either side. Zoe spins an orb web to catch her food. She often spins it in the corner of window frames, where it is easily recognised as it has two empty sections in the upper half of the web. The signal line that lies between these empty sections runs from the hub to Zoe’s retreat on the edge of the web. By keeping her front legs on the signal line, she can tell what is going on in her web without having to be there. 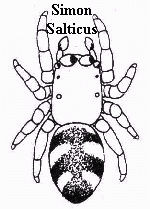 Simon grows to about half a centimetre long with a black and white striped body. He has the best eyesight of all spiders, as two of his eight eyes are enormous. Simon doesn’t spin a web but wanders around looking for food. When he spots a possible meal, he creeps up to it very slowly. When he is close enough, he jumps through the air landing on his prey – which he subdues with a quick bite. He can be found on sunny days walking over the garden fence or the outside wall of your house.

Sid is a small spider, only half a centimetre long. He is yellow with black markings and unlike other spiders his head is nearly as big as his body. He spends the day hiding and comes out at night to search for food. If you are lucky enough to see him ,you will wonder how he manages to catch anything at all as he moves so slowly. When he spots something that could be lunch, he creeps up on it – and when he is close enough he spits a stream of sticky gum from his jaws. This flies through the air and lands over his lunch, pinning it to the ground. Sid can then wander over and eat when he is ready.

Sue lives in holes in walls. Any wall will do, as long as it has plenty of small

holes. She sometimes wanders indoors when she is searching for a new home. You can always tell Sue’s web as it looks like a silken star stuck to the wall. The rays of the star are really trip lines which tell Sue if dinner is passing by. If a passing insect touches one, Sue rushes to the entrance of her hole and checks which trip line was triggered. She then dashes out and grabs her dinner whisking it back inside in a flash. 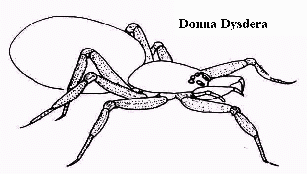 Dona is a very striking spider over a centimetre long. Her legs can be orange or red, her head red or purple – while the rest of her body is white. Her most distinctive feature is the enormous pair of jaws that stick out of the front of her head. Dona lurks in dark damp places where she feeds on woodlice, which are her favourite food. 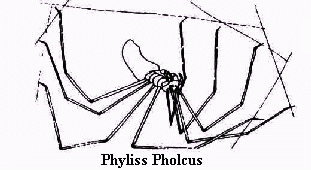 Phyliss grows to about a centimetre in length but her legs can be as much as four centimetres long. She makes her webs in the upper corners of rooms and behind cupboards. These are very untidy affairs but they are so fine that we don’t notice them until they become covered in dust. If Phyliss is threatened by anything (i.e. you prodding her with a pencil) she spins her body round in a circle to frighten away the would be attacker. Sometimes she spins so fast that she becomes invisible.

Tim is the large brown hairy spider that runs across the floor on autumn evenings, or has to be removed from the bath by the first person up in the morning! Many people believe he comes up the plughole, but this is just not true. He simply falls in during his night time wanderings. Due to the slippery sides of the bath, he can’t get out. Leave a towel over the side of the bath, then if Tim falls in he will be able to escape before anyone is up.

Stella grows to nearly a centimetre in length and is either entirely black or dark reddish brown. She spends the day hiding in a retreat at the edge of her web. At night she comes out and hangs upside down from the middle of it. The web is an untidy sheet of spider silk with a few vertical threads to support it. Stella tends to spin her web in out of the way places where she won’t be disturbed. When an insect blunders into her web, she doesn’t just rush out and bite it. Stella approaches her prey cautiously and, using a special comb of bristles on her back legs, throws a few strands of silk over it. She then backs off to let the insect become tangled in the threads. She does this several times until lunch is firmly wrapped. Once she is sure it is safe to approach she administers the fatal bite. 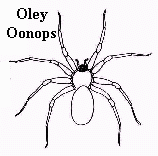 Oley is only two millimetres long, so you will have to look carefully to find her. Having found a small spider, it is easy to tell if its Oley or not – as she is pink. She hides away in the daytime, coming out to hunt after dark. She has a habit of walking a few steps then running a few then walking a few more. This rather jerky pattern of movements make her easier to spot.

There are several other small spiders that are found in houses. These are usually money spiders, which are difficult to tell apart without examining them under a microscope. For this reason they have been left out.

Well, I hope this has helped you get a better understanding on the most common house spiders!

This article was originally written by Pete Smithers for the Bug Club Newsletter. I am grateful that he has kindly allowed me to reproduce it here.

You may also like to check out How Do Spiders Mate?