Fancy pigeons with feathered feet are a sight that you can find often at bird shows and displays. But why do some pigeons have feathered feet while others don’t? What evolutionary processes lead to feathers on some pigeons’ feet? Let’s understand this in more detail.

You can see feathered feet in some pigeons. Also, pigeons have feathers on their feet in varying degrees.

While some of them may show just a hint of feathers on the feet, other pigeons may have so many feathers that their feet appear like a different set of wings altogether!

Have a look at these beautiful birds and their unique foot feathers:

Having feathers on their feet sets these pigeons apart from others of their kind.

Pigeons with this characteristic have become the subject of much discussion. You can see some of these birds in bird shows and exhibits.

Pigeons get feathery feet because of one or more genetic variations. Let us talk more about what mutations these are.

Why do Some Pigeons Have Foot Feathers?

Foot feathering is an unusual trait among bird species. Usually, birds have scales on their feet. However, some boreal birds and raptors have feathered feet.

Pigeon breeds that develop feathers on the feet are commonly termed muffs.

Though you might think that this is just some sort of overgrowth of feathers like humans that have hair in the wrong places, foot feathers are actually not the skin growing extra feathers.

Research examining muscular and skeletal morphology in pigeons tells us something much more interesting:

Pigeons with feathered feet have legs that started out becoming a separate wing but could not evolve into it fully. It ended up becoming a leg instead.

For the technically oriented, there are two factors in the genes of vertebrates like ourselves and roosters that decide what a limb is going to become: a forelimb or hindlimb.

These factors are scientifically known as “limb identity transcription factors” and scientists have given them the rather James Bond- esque code names Tbx5 and Pitx1.

Tbx5 is responsible for a limb becoming a forelimb, while Pitx1 makes a limb a hindlimb.

According to researchers at the University of Utah, pigeons with hindlimbs that have feathers, have a Pitx1 with a markedly reduced impact.

In effect, what happens is that the body decides to make a wing instead of a leg even in the hindlimb when Pitx1 is not able to give the right effect.

Genes That Cause Foot Feathering

These two transcription factors (Pitx1 and Tbx5) do their work as part of two genes that help create limbs.

These two genes are called “Slipper and grouse“. Genetic variations of these are primarily responsible for feathery feet in pigeons.

Now, before we go full-on technical on you, let’s first understand the term “allele”. An Allele is nothing but the variant of a gene.

For the X-Men fans out there, yes, it’s what Dr. X was talking about.

But the difference here is that the effect of alleles is very much real and shapes the way many beautiful variations work in nature.

Each gene comes with two allele’s – one from each parent.

The slipper gene comes in two alleles, “slipper” and “no slipper”. Each of these alleles is partially dominant.

The slipper gene gets two alleles, one from each parent. What alleles it gets decide how much feathering will happen on its feet.

Grouse is also available in two alleles: ‘grouse’ and ‘no grouse.’ In this case, however, the grouse allele is the dominant one.

Each pigeon receives two copies of the grouse gene, one from each parent.

How Does Muff Happen?

The following table shows the combinations of these 4 alleles received from the two parents:

Pigeons are Related to Dinosaurs, and This Plays a Role in Feathered Feet

Research establishes a close relationship between birds and dinosaurs because birds have directly descended from them.

Research suggests that dinosaurs might have had feathers too. In fact, scientists announced the first-of-its-kind dinosaur with feathered feet in 1996.

This may have been common in meat-eating theropods like Tyrannosaurus rex and raptors.

There are similarities in the genetic changes responsible for feathered feet in such dinosaurs and the feathered-feet pigeons that we see today.

In fact scientists consider domestic pigeons as great models to study the evolution of genes and development associated with limb diversification.

Why Did Dinosaurs Need Feathers?

The University of Notre Dame also highlights in an article that evolutionarily, feathers did not evolve only to aid flight.

Fossils dating back 150 million years show that dinosaurs had long feathers not only on their feet but all over their bodies, from head to toe!

One possible explanation is that these feathers might have been meant for insulation.

Why do feral pigeons have deformed feet?

Deformed feet in pigeons can be caused by residues, foot infections, standing on surfaces such as railway tracks, fibers, and thread becoming entangled in their feet.
People use pesticides to keep birds away, but this is harmful to the birds and can harm their feet.

What kind of bird has feathers on its feet? 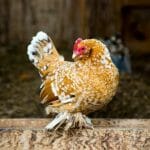 Snowy owls, golden eagles, certain bantam breeds, and ptarmigans have feathered feet.
Aside from them, certain chickens and domestic pigeons have been bred with and without feathers in the same species, with 146 and 350 birds, respectively

Why do pigeons have a club foot?

Twigs, strings, human hair, and fibers becoming entangled in pigeons’ feet can cause club feet or abnormal feet.
Tightening thin threads and the likes around the birds’ feet can stop blood circulation and cause tissue failure, causing the foot to fall off.
It may also result in necrosis and foot infections. Pet owners can save domestic pigeons from such unpleasant encounters by removing such kinds of strands from their feet and keeping them away from their yard or garden.

Feathered feet in pigeons, particularly fancy ones, can be attributed to two genes, slipper, and grouse. These characteristics make feather-footed pigeons a subject of interest at exhibitions.

The evolution of feathered feet throws new light on how evolutionary processes work.

It shows that even within similar limbs, evolution can create different features for different purposes. It also throws light on the reason why birds have evolved feathers.