A Bird’s Brain and Nervous System

Like all animals, birds need a control center and a set of communication channels to ensure their system runs smoothly.

As in most more of this world’s more complicated animals, this is usually called a brain and a nervous system.

Birds have a similar basic plan to their nervous system as the rest of the vertebrates.

The nerves are bundles of neurons – a neuron is a single cell which transmits a micro-electrical pulse from one end of itself to the other. Neurons come in three sorts, sensory, motor and relay.  Relay neurons connect sensory and motor neurons and are found in the brain and the spinal chord.

Sensory neurons are little alarms triggered by a variety of sense organs: eyes, ears, bristles, etc. They send the messages to the brain that the bird uses to build up and maintain its image of the world.

However, there is considerable variation in the size of the brain between birds of similar body mass.

For birds with a similar body weight brain size can vary a lot, for example, comparing two birds with body weights around 85g, we see that a Quail has a brain weighting  0.73g while the brain of a Great Spotted Woodpecker, at 2.7g has a brain that is relatively three times heavier.    For larger birds brain weights naturally increase, however in certain families such as corvidae and psittacidae relative brain size is much greater than in most other bird families, with the blue and Yellow Macaw having a brain weighing 20.73g and a body weight of about 1kg.

The award for largest brain however goes to the African Ostrich with a brain weight of 29.4 grams.  Although larger in total weight when we look at brain to body weight ratio the Ostrich, with a body weight of about 90-140 kg, we see it is still a relatively small brained bird (its brain represents only 0.20% of its total weight) whereas the Blue and Yellow Macaw is a large brained bird as its brain represents around 2%  of its total weight (10x greater), approximately the same value as for humans.

A bird’s brain is different to a mammalian brain, this is not surprising really when you think that the last common ancestor of birds and mammals lived 300,000,000 years ago.  The differences are so great that up until recently many scientists did not understand the bird brain at all.  A new analysis and a new formal naming system for the parts of the bird brain were published in the Journal of Comparative Anatomy in 2008 by Reiner et. al.. This revised system is generally now considered the accepted nomenclature for discussing avian brains.

In it the main sections of the forebrain, the cortex and neocortex in mammals, are renamed as the pallidum, nidopallium hyperpallium etc. 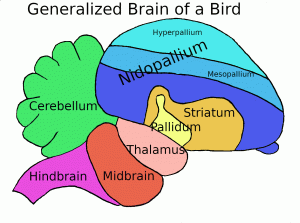 As Alkowicz and Kocourek et. al. explain in their 2016 paper on neuron density in birds “Because these “extra” neurons are predominantly located in the forebrain, large parrots and corvids have the same or greater forebrain neuron counts as monkeys with much larger brains. Avian brains thus have the potential to provide much higher “cognitive power” per unit mass than do mammalian brains“.

Another major difference between bird brains and mammal brains is that all the wrinkles and folds that so define the higher mammalian brain, 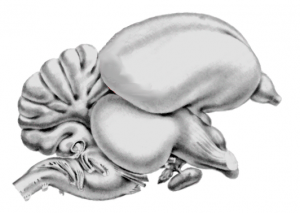 particularly the telencephalon (that part of the brain that is the most highly developed and anterior part of the forebrain, consisting chiefly of the cerebral hemispheres) are absent from the bird brain.  The bird brain appears unusually smooth and simple in comparison.  This was one of the factors, combined with the fact that bird brains are usually small, that led early researchers to assume birds could possess no higher brain functions.

The mid-brain is also well developed, as this is the part of the brain primarily concerned with sight – while the olfactory lobes are reduced as would be expected, given that bird’s in general have little use of the sense of smell.

The bird’s skull is mostly occupied by eyes – and the brain has to make do with what space it can find in a rather narrow cranium.

The brain contacts most of the body through the spinal column/chord, with which it forms the central nervous system.

Birds normally have 38 pairs of spinal nerves radiating out to the body along the spinal chord. A number of these are grouped in small bundles, called plexi (i.e., the brachial plexus) which act as regional headquarters maintaining and controlling some actions with minimal input from the brain.

Birds also have what is called an autonomic nervous system, which as in mammals and reptiles controls such essential actions as heartbeat, breathing and digestion.

This can be divided into two sections; the sympathetic nervous system and the parasympathetic system.

The sympathetic nervous system works in harmony with the endocrine system and the release of adrenaline and noradrenaline to stimulate a rapid response to danger. This is often called the ‘fight or flight’ reflex, as it determines when a bird decides to make a rapid exit from the awareness of a predator.

The parasympathetic system is made up of a series of groups of ganglia situated near various important organs, such as the heart, lungs and digestive organs.

These it controls and regulates with only occasional input from the bird’s brain.