It is a reasonably well known family, however in Sibley and Monroe’s new phylogeny, many other traditional families have been incorporated into the family Corvidae – giving it a huge and unwieldy 649 species.

Here however, I have stayed with the traditional Howard and Moore classification of the family and will treat the other families independently as well.

The Corvids in this scheme are made up of about 119 species in 26 genera.

You can use these links to skip ahead to the bird you are after, or else just keep reading!

What Is A Corvid?

Though the traditional crows and ravens are black, sombre birds – many of the family are brightly coloured, e.g. Magpies and Jays.

The brilliant blues and greens found in these birds – as well as the iridescence in among the blacks of many corvids -are structural colours caused by refraction of the light by minute physical aspects of the feathers.

The blacks, browns, greys and whites are pigment colours, resulting from various forms of melanin.

Corvids have 11 primaries, but one is only 1cm long and not easily visible, it is called a ‘remicle’. Corvids have 12 retrices or tail feathers. They have large legs and feet and the tarsus is usually scaly. Corvids also have strong solid bills.

Most corvids are open forest, scrub or grassland birds.

Many are omnivorous, feeding on the ground on whatever is available. Most corvids are happy to prey on eggs and young of other birds, even other corvids. They are renowned as hoarders and buriers of food.

There is generally little sexual dimorphism in the family. They are all socially monogamous, some species pairing for many years. The larger species are quite long-lived and well known for their intelligence. Some species such as Rooks and Jackdaws are colonial breeders while other such as Ravens and Magpies breed solitarily.

Normally, the female does all the brooding. Like most passerines the young are hatched altricial – featherless and helpless.

Ravens and Jackdaws have both been trained to count to 5 or 6 and scientists generally agree that Crows, Jackdaws and Ravens learn more, and faster, than mammals of similar weight.

In fact, ravens can be taught to speak English words.

Corvids can be found all over the world, except southern S. America, the Poles and various islands. They are believed to have originated in central Asia and species diversity is still high there.

The oldest corvid fossils have been found in Europe from 20-25 million years ago; the Miocene.

Jays are believed to be the most primitive of the corvids. Magpies, Choughs and Nutcrackers are all basically modified crows. Crows, rooks, Ravens and Jackdaws are the most successful members of the group, except in Central and Southern America where only Jays have reached.

Corvids are believed to have reached the Americas via the Bering Land Bridge. Jays being the oldest corvids, reached America first and rapidly spread south – but have not yet reached the southern half of S. America. American Jays are predominantly tropical or sub-tropical whereas in the Old World they are temperate and/or alpine species.

In most parts of the world corvids have received poor treatment from mankind.

Often being killed indiscriminately by grain and sheep farmers, who were willing to blame huge losses on them. Crows, Rooks and Jackdaws were killed by law in the UK from 1457 – and during the reign of Elizabeth I, a bounty was paid on their heads.

They have been similarly persecuted in USA and Australia, yet still they survive and some species even thrive on and around human habitations, especially now that they are more protected by the law.

There are 44 species of Jay in the world, 37 of these are only found in the Americas and 30 of these are found south of the USA where they are the only corvids. 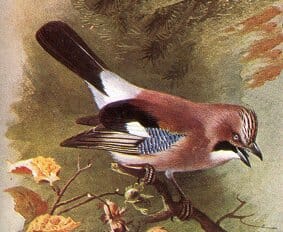 Jays are often colourful birds, with many bearing various amounts of blue plumage.

Many species are socially monogamous, though at least 2 species in the genus Aphelocoma and Cyanocarax dicheyi have helpers at the nest, which feed both the incubating female and the young. Most build nests in the branches of trees or shrubs, except Lidth’s Jay which makes an uncharacteristically large nest in a hollow tree.

Both parents feed the young though the female is mostly responsible for nest building and incubation of the eggs. The 2-6 young are altricial (being born practically featherless and helpless).

One study showed that between 40-80% of Jays fall prey to predators before they leave the nest, either as an egg or nestling. The main predators are humans, crows and squirrels. This survey was carried out on the temperate species Garrulus glandarius.

Young Jays leave the nest after about 3 weeks.

Jays are generally omnivorous feeding on seeds, fruits and insects. Though some species such as the European Jay and the Pinan Jay have specialised on plant seeds, Oak acorns and Pinan Pine seeds respectively.

In most species, breeding commences at one or two years of age – but the social breeding species and the European Jay take at least 3 years to reach sexual maturity. Several species have numerous subspecies and wide distributions. The Scrub Jay has 17 or 18 recognised subspecies.

Most species are sedentary, living in pairs or small groups outside of the breeding season. Blue Jays, however, congregate into large flocks and migrate about 100 miles south.

Most Jays hop instead of walking.

There are 20 species of Magpie and Treepie in the world .

They are all confined to an area from India, then over the Himalayas to China and down through SE Asia, except for the following species:

Magpies are believed to have evolved from a Jay-like ancestor and the ‘pie’ in Magpie and Treepie refers to the black and white or ‘pied’ plumage of many of them. 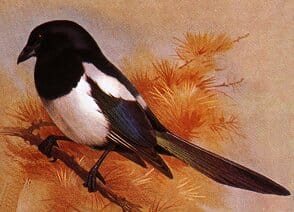 The common Magpie was originally known simply as ‘the Pie’, but in the 16th century the prefix Mag was added meaning ‘chatterer’.

Both the European Magpies are highly social and tend to be found in small flocks outside of the breeding season. Other species are usually found in pairs, or in small groups of 3 to 4. This applies to the Treepies as well.

All are likely to be heard mimicking other birds.

All species are omnivorous taking insects, small birds eggs, small mammals, tree frogs and small reptiles as well as a variety of fruits. Some species, such as the Himalayan Treepie, are more fruit orientated than most.

All breed between March and July and most build relatively flimsy nests. The European Magpie, however, builds a relatively strong, roofed nest and the Green Magpie builds a very large solid nest.

In parts of Britain the magpie is regarded as a bird of luck, if you treat it correctly. Thus when you are out and about in the morning, you should doff your hat to the first magpie you see, saying:

This will help assure your good luck throughout the day!

Nutcrackers are so named because they generally eat nuts of both pine and deciduous trees. 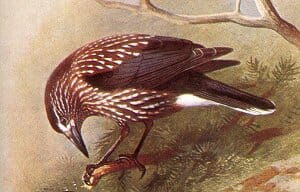 Nutcrackers are unusual corvids in that they have considerable amounts of brown in their colouration.

The European species is found in temperate climes from Europe to Japan, including the Himalayas – though otherwise its distribution is more northerly than this. Clark’s Nutcracker occurs in central to west coast N America from Canada to California.

The Eurasian Nutcracker comes in two races (thick billed and slender billed) and 8 subspecies. In fact nutcrackers have a special projection inside the lower mandible of their bill that makes it easier for them to crack nuts.

Nutcrackers also have a throat pouch in which they can carry food items without having to swallow them. The young are fed from this.

Nutcrackers have the same dipping flight as Jays and the same habit of burying nuts. They normally bury nuts further up hill than they collect.

It has been shown that they can find buried nuts even after they are covered in snow.

Breeding starts in March or April, depending on latitude and in some places at least.

Breeding success is related to the hazel nut crop. The better the hazel nut crop, the more eggs the female will lay. Eurasian Nutcrackers build their sturdy twig and mud nests near to the tree trunk 4.5m to 9m (15-30 ft) up in the tree.

Choughs are easily recognised birds – by their all black plumage with slightly down-curved and (for corvids) slender bills. 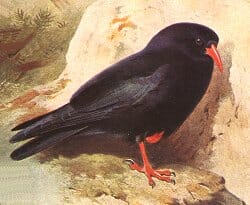 Both species are rare in the UK – though this was not always the case – and have patchy distributions stretching from western Europe to western Asia. Alpine Choughs are birds of mountainous regions and have been recorded at heights of 8,330 m or 27,000 ft in the Himalayas. There are 7 subspecies of the Common Chough and 2 of the Alpine Chough.

Choughs are gregarious (they live in groups) and generally breed in colonies.

Choughs are mainly insectivorous, probing the earth with their bills and digging holes in search of insect larvae. Both species have the unusual habit of hiding food, covering it with sticks and stones.

Nests are built on inaccessible cliff edges, with Alpine Choughs breeding at altitudes as great as 5,200 m or 17,000 ft.

Common Choughs will also breed in disused quarries and mine shafts. The nest is made of twigs, heather, bracken and lined with wool. The female incubates the 2-6 eggs for 17-18 days. However, she starts incubating before she has finished laying – causing the young to hatch out at intervals of about 2 days.

The young remain with their parents for several weeks after fledging. Their parents show them how to find food.

These birds are mostly terrestrial, being very poor flyers. They run well and hop quite effectively, but avoid flying if possible.

They are about 20 cm (8″) long, mostly bluey-black birds with long legs.

They all live in central Asia, preferring alpine environments and feeding primarily on insects. They nest either in low trees or holes in the ground.

Pseudopodoces humilis is Hume’s Ground Chough, a bird of the highlands.

Like the Ground Jays it is primarily insectivorous. It nests in rock cavities or old rodent burrows.

Both partners participate in building the nest, incubating the eggs and feeding the young.

Zavattariornis stresemanni is a small starling-sized corvid known as the Abyssinian Bush Crow or Bush Pie.

It looks like a Starling without the iridescence, with bluish-black wings and tail.

It has a very limited distribution in Ethiopia. It is omnivorous with a strong liking for insects. Though it can be found in small flocks, it is a solitary nester. It breeds from June until February building a domed nest with an entrance tunnel on top, at the top of a thorn tree.

One female lays up to 6 eggs, but she may have help incubating and feeding the young from additional adults besides her mate.

Ptilostomus afer, often known as the Piac Piac, has a much wider distribution all across Central Africa.

It is usually seen in small parties flitting around the tops of the Borassus Palms it likes to live near. It feeds primarily on insects and – like the Jackdaw – can be seen perching on the back of livestock. It breeds from March to April and builds a nest in the top of a Palm tree ,where it lays 3-7 eggs.

The Shrike Jay (Platylophus galericulatus) is found in S.E. Asia and Indonesia. It is a largely carnivorous bird of tropical forests. It was once thought to have belonged to the true Shrikes (Laniidae) but is now known to be an unusual Corvid.

Well, I hope you have learned what you needed to about the corvids of the family corvidae including those wonderful choughs!