Almost human in many ways, they suffer greatly at the hands of humans.

Orangutans are found only in Sumatra and Borneo in S.E. Asia. They are by far the most arboreal of the larger apes, living almost exclusively in the rainforest canopy. Though they will come down to the ground on occasions to feed on termites and to cross cleared land. Adult males are more prone to this than females or juveniles.

Today habitat destruction and loss of mature rainforest because of logging are the greatest threats to the future of these wonderfully intelligent and gentle animals.

Orangutans are sexually dimorphic, meaning that there are considerable physical differences between males and females. Basically, in Orangutans, males are much larger. An adult female weighs about 38kg while an adult male weighs around 86kg.

Orangutans primarily eat fruits when these are available, otherwise they eat leaves and bark. They also eat termites.

Over 400 different food items have been identified for the Orangutans of Kalimantar, Borneo – by far the most studied population.

Most of an Orangutan’s life is spent eating or moving to another source of food. Orangutans appear to live a leisurely life, seldom hurrying or getting overly excited – just moving around the forest canopy eating and sleeping.

Orangutans are not overtly social animals and for a long time it was supposed that they had little or no social life at all. Birute Galdikas however has shown that they live within an extended social environment – at least females and juveniles do and are aware of all their neighbors.

They have individual friends and less popular companions. They play and seem to enjoy one another’s company. However, the costs of foraging often demand a solitary existence. Orangutans are far less demonstrative in their relationships than other apes. Mutual grooming is a rare experience rather than a common one. 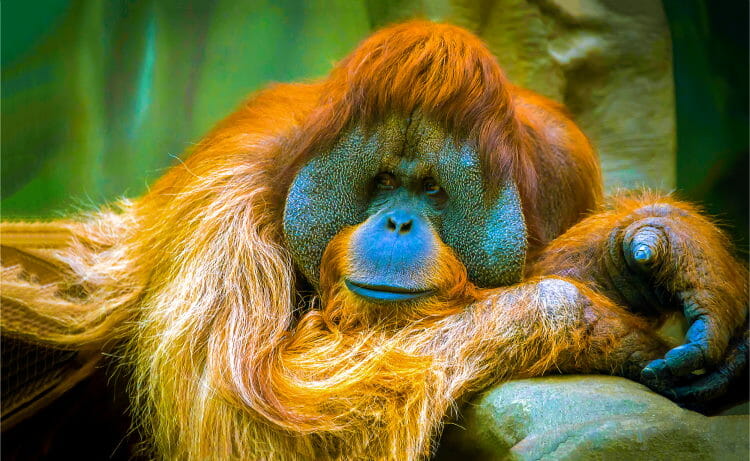 Orangutans are long-lived animals and take a similar length of time as humans to reach maturity. When an Orangutan is born, its primary reflex is to cling to its mother. It will become a permanent feature of this form for several years. Though after the first year, it will leave her side to investigate the world for short periods of time.

A young orangutan lives alone with its mum and maybe an older sibling.

Sometimes other mother/juvenile groups will be met and even traveled with for some time. During these periods young Orangutans will play with each other. Orangutans breast feed until the mother is pregnant again. Males are weaned and chased off but females are merely weaned and often remain with their mum for several more years.

Weaning normally occurs at about 8 or 9 years but can occur earlier. After weaning a young Orangutan is a juvenile, not yet sexually mature enough for breeding, but capable of sexual activity.

They live a semi-solitary existence sometimes on their own, sometimes travelling with other juveniles and sometimes with their parents or even with other well known adults.

Sometime between the ages of 10 and 14, males become sub-adults, larger now than females they are still too small to compete with full adult males for sexually receptive females. Their lives become more and more solitary as they put on weight and gain first the beard and then the cheek pouches of a full adult.

Once fully adult, a male Orangutan spends his time eating and searching out and consorting with receptive females.

Other males are no longer tolerated and their presence results in branch throwing, dead tree toppling and if pushed physical fighting – all of which is accompanied by a selection of vocalizations.

Adult males call fairly regularly, probably as a method of territory maintenance. The ‘Long Calls’ are loud, deep, ululating calls which can be heard from several miles away.

Adult males appear to occupy territories on a semi-regular basis, at least in the non-migratory populations in Borneo.

The Migratory populations in Sumatra where migration is a response to seasonal food availability, obviously have less permanent territories. Juvenile female Orangutans tend to remain in the same territory as their mothers, with whom they may continue to relate with on and off even after they become mothers themselves.

Females normally first become pregnant at around 15 years of age. Orangutans are then slow breeding animals who have few predators in the wild but whose population growth is slow.

They show considerable individuality and are for the most part gentle with each other and tolerant of their young. Orangutans nest in trees, building a new nest every night out of twisted and broken branches in the canopy. They will also build temporary day nests for midday nests.

Younger sexually mature Orangutans are promiscuous and experiment with sex seemingly by committing rape, though little harm appears to occur to the victims. Older males will ‘consort’ with a chosen female when she is receptive and spend days or weeks with her, fighting off other males and mating with her regularly.

Orangutans like Humans and Bonobos mate face to face.

Because Orangutans are climbing rather than walking animals, they can hold things with their feet almost as well as with their hands. Their hips are more flexible than ours, their legs are shorter in proportion to their arms which reach down to their knees.

A male can have an armspan of 8 ft. Their teeth and jaws are much stronger and heavier than a human’s and their canines, particularly of males, are much larger than ours. An adult male can open a coconut with his jaws alone.

Orangutans are fascinating animals and for those who want to know more about their biology and social interactions, their intelligence and tool-using capabilities I recommend the book: Orangutans (by Dr. Robert W. Shumaker).

Well, I hope you have enjoyed these interesting orangutan facts!

Perhaps now you’d like to learn about big cats.