Rotifera Etymology- From the Latin Rota a wheel, and Ferre to bear or carry.

Rotifera Species Count: According to The Catalogue of Life there are currently 2,014 named species of Rotifers.

Introduction To The Rotifera

Rotifers, which were once called “Wheel Animacules”, are a small phylum of tiny to microscopic animals, mostly around 0.1–0.5 mm long, however the full size range is from 50 μmto over 2 mm.

They mostly inhabit freshwater and damp terrestrial habitats. A few species can live in brackish or salt waters; Brachionus plicatilis is one of the very, very few marine rotifers. Species that inhabit terrestrial habitats either live in damp soil or are associated with moist lichens and mosses.

Most species of Rotifers are free-living but within the phylum there is considerable variety of lifestyles. Of the free-living species some are truly planktonic, and swim through the water, but many others prefer to move across a substrate.   About 25 species of rotifers live as colonial organisms, either sessile or not, and a few species are parasitic.

Rotifers are numerous in most freshwater ecosystems, and as such make up an important component of the freshwater zooplankton. Because of this they are a major food source for small predators, both active carnivores and filter feeders.

Rotifers are an ancient group of animals, although their soft bodies mean they have left very few fossils behind. Many species have wide, cosmopolitan, distributions. Nevertheless, there are a few endemic species with more limited distributions such as Cephalodella vittata which is only found in Lake Baikal.   According to some recent DNA coding research some of these widely distributed species may actually be species complexes.

One species of rotifera, Rotaria rotatoria, has recently been discovered to produce a previously unidentified molecule that can paralyzes the larvae of the Trematode worms that cause schistosomiasis, preventing them from spurring new infections.  Hopefully this will lead, eventually, to a better treatment for this debilitating disease.

The majority of Rotifers exhibit a free-living life style.  Apart from free-living species, there are a small number of rotifers (35 species as of 2019)  that live sessile lives. These species build themselves gelatinous tubes to hide in or cement themselves to a substrate. Sinantherina socialis a species that was described by Linnaeus in 1758, is a good example of a sessile and colonial rotifer. This common species survives predation by small fish by being unpalatable. Quite what makes them unpalatable is not yet known, but in a paper published in 2014 by Adolfo Felix, Margaret E. Stevens and Robert Lee Wallace revealed that 14 different species of fish all agreed that these rotifers were not good to eat. However, they were only able to learn this by taking some of the rotifers into their mouths, and then spitting them out again.

Some species, such as the marine Brachionus plicatilis, can alternate between sessile and swimming modes.  Some research has been done on what drives the females of this species to alternate between behaviours but it is not fully understood yet. Things that have been shown to stimulate changes in behaviour include, starvation, the presence of chemicals indicative of predators and changes in either water temperature or salinity.

As with many other microscopic animals, adult rotifers often demonstrate species eutely. Meaning each adult individual within a given species possesses a fixed and limited number of cells. For rotifers this is usually around 1,000 and is sometimes taxonomically important.

Non-parasitic species of Rotifers Rotifers feed on decaying organic detritus, dead bacteria, algae, and protozoans, a few species have been observed to eat other Rotifers. Being very small animals themselves they can only ingest tiny particles of food, usually only up to 10 micrometres in size.

Rotifers are master survivors.  A paper published in September 2020 by Aydin Örstan describes how three species of Rotifers in his garden bird bath were able to survive extreme dessication (143 days without water), having the water of the bird bath frozen, and having the water temperature raised to 40 degrees C or more for four hours.

The Anatomy of Rotifers

The body of a typical rotifer is divided into three main sections; a head, trunk, and foot.  Most rotifers are somewhat cylindrical in shape. They is a well-developed cuticle.  The Rotifer cuticle is nonchitinous and is composed of sclerotized proteins   This cuticle is either thick and rigid or thinner and more flexible.  Rotifers with a more solid cuticle are referred to as ‘loricate’ and those with a more flexible cuticle are called ‘illoricate’. Loricate cuticles are usually made up of multiple plates, and often have spines, ridges, which are believed to be for protection against predators.

The most distinctive feature of rotifers is the presence of corona on the head.  This is a ciliated structure that facilitates movement, allows feeding and from which the animals acquired their older name.  The beating of the cilia, looks, quite often, like a wheel spinning. The main function of this corona of cilia is to draw water, and associated food particles, into the animal’s mouth.

Some species of rotifers can retract the foot partially or wholly into the trunk. The foot ends in one to four toes.  In free-swimming species the foot may be reduced in size or completely absent.

The coronal cilia generate a current that sweeps a continuous stream of food particles into the mouth. Behind the mouth are a variable number of salivary glands. From the mouth the food is passed to a powerful chewing pharynx called the ‘mastax’,   This mastax contains a number of tiny, calcified, jaw-like structures called ‘trophi’,  The form of the trophi vary between species.  The actual structure of the trophi is related to the species feeding regime. Filter feeders tend to have more crushing, grinding trophi and predators biting grasping trophi.

From the mastax food is passed into the oesophagus and from there into the stomach.  Most digestion and absorption occurs in the stomach. From the stomach the remains of the food pass into a short intestine.  Finally wastes pass out of the body through an anus or cloaca.

A pair of protonephridia open into a bladder like organ that drains into the cloaca.

Rotifers usually possess several sets of sensory organs including one or two pairs of short antennae, two tiny sensory pits on the head, various sensory cilia and up to five eyes. The eyes are simple in structure, sometimes with just a single photoreceptor cell. All od these sensory structures are connected to a small brain, or cerebral ganglion which is located just above the mastax.  A variable number of nerve cords extend from these ganglia down through the body. In many rotifers the nervous system amounts to up to about 25% of the roughly 1,000 cells that make up the animal’s body.

The vast majority of the Rotifera reproduce only, or mostly through parthenogenesis.  Meaning every member of the species is a female.  Males do occur in some species, usually they are very much smaller than the females, cannot feed and live only to pass on their sperm.

The Order Bdelloidea were, until recently, considered to be entirely parthenogenetic.  However, a paper published in August 2020 claimed to prove that the species Macrotrachela quadricornifera reproduces sexually.  Other recent evidence has also suggested the Bdelloid Rotifers do occasionally reproduce sexually.

The three known species of Seisonacea are truly dioecious, and reproduce sexually.  In between these two strategies are a large number of species that reproduce asexually (by parthenogenesis) for many generations, then, as a result of varied stimuli smaller males are produced and sexual reproduction occurs for a generation.  This is called cyclical parthenogenesis.

This in between group is often called the monogononta.  Parthenogenesis (otherwise referred to as the amictic phase – without meiosis) is the dominant aspect of most rotifers’life history. It promotes fast population growth and extensive colonization. During this phase males no males are produced and the amictic females only produce diploid ova by mitosis.  These ova develop parthenogenetically into females that are clones of their mothers.

Fertilization is internal and in most cases the egg is deposited on some aspect of the substrate, or adhered to the females cuticle.  A few species retain their eggs and the young hatch and escape the females body.  Young rotifers usually look like miniature versions of the adult.  In the few sessile species, the young are free-moving and look much less like the adult forms.

Several recent studies have shown that nano-sized particles of plastics and polystyrene cross membrane barriers in the guts of rotifers.  This means the smallest, and possibly most toxic plastic particles become embedded in the animals tissue and are not egested with other non-food items, including larger particles of plastic.   This is an important discovery because it means the plastic load can increase as long as the animal is active and alive.  Because rotifers are near the base of the food web this will result in ever increasing amounts plastic particles moving up the food web, putting heavy and heavier toxic stresses on animals nearer the top of the food web. The end of this process is poisoned people.

The Taxonomy of Rotifera

As with all the animal phyla, the taxonomy of the Rotifera is under discussion, with new data, and new interpretations of genetic analyses resulting in people developing different ideas on the true relationships between different groups of organisms.  What I have laid out below is the traditional view, supported by most text books.  However in 2020 a quite different view was upheld in the book “The Invertebrate Tree of Life” by Giribet and Edgecomb (Princeton University Press 2020).  In this scheme the Phylum Rotifera would include the Phylum  Acanthocephala (which would cease to by an independent phylum) see box. 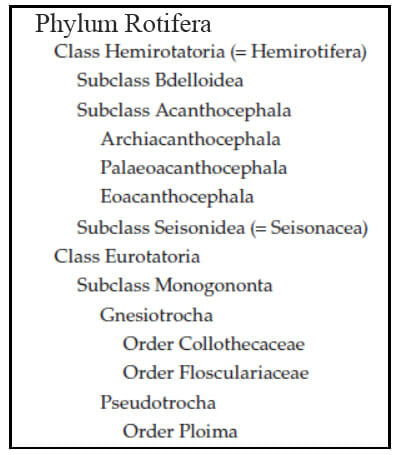