According to the online database The Catalogue of Life there are 25 to 29 known living species of Orthonectida.

The Orthonectida are a small phylum of small and poorly understood animals. They have very simple bodies, sometimes consisting of less than 50 cells, although a number of species have between 300 and 400 cells to the adult females body.

All known species are internal parasites of marine invertebrates from the orders  (Annelida, Echinodermata, Mollusca – Bivalvia and Platyhelminthes).

The Orthonectida were once part of the Mesozoa along with the Dicyemida.   However modern phylogenomic analyses suggest the Orthonectida are most closely related to, and perhaps evolved from the Annelida. See the discussion on Mesozoa, or Zverkov et. al. May 2019.

Exactly what effect these parasites have on their hosts is very poorly studied. However, while there is no evidence that they are fatal to their hosts when they depart as adults as is the case with some parasites such as the Nematomorpha, high parasite loads must inevitably have some negative effect on the host’s ability to function.  There is some evidence that in the case of the bioluminescent brittle star Amphipholis squamata, the presence of an Orthonectid parasite load can result in a reduced production of light by the by the host.

The Orthonectida has one of the smallest genome of any multicellular animal.  Revealed to consist of a meager 43 million base pairs coding for about 9,000 genes by Mikhailov in 2016. This is barely half the value for the tiny, free living, marine Placozoans, also considered to be a small genome at 98 million base pairs.  Only the Myxozoa and some plant nematodes are known to have smaller genomes.

Basic Biology of the Orthonectida 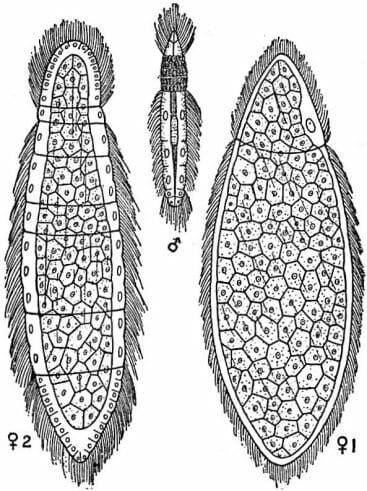 The Orthonectida are parasites on a wide range of marine invertebrates including Platyhelminthes, Echinodermata, Mollusca and Annelida.  They are gonochoristic, meaning they have separate male and female individuals, as adults.  However they ca reproduce asexually by the production of agametes when the immature larva first infect their host.

The adult Orthonectida have no gaseous exchange organs, no circulatory system, and no digestive system. Until recently it was also thought that they had no musculature or nervous system.  However research published in 2008 and 2016 by Slyusarev and Starunov has shown that they do, in fact, possess both.  Needless to say both systems are rudimentary and involve very few cells.

The adults are microscopic animals (0.05 mm to 0.79 mm in length). The basic body is made up of epithelial cells surrounding the few muscle, nerve and reproductive cells.

The larvae are released from the female through her genital pore into the open water and immediately seek out a host.

Within the host they spend most of their life swimming around inside the body of their host absorbing nutrients from the host’s body fluids and growing.  These growing larva are usually found in the host’s reproductive organs and muscles, but not in their digestive tract.

It has been suggested by Slyusarev and Cherkasov 2008 that the larva acquire nutrients using both pinocytosis (absorbing nutrients dissolved in fluid) and phagocytosis (engulfing solid particles of food).

There are apparently differences between species in terms of the number of body cells, and females are larger than males.  The best study of the anatomy is that referenced above in which the existence of basic muscles and nerves was revealed.   This study was on the species Intoshia linei.  It reports that adult females of I. linei have around 370 cells in their body.  Of these 280 are epithelial cells and around 35 are oocytes while nine make up the female’s genital pore.  This leaves only a total of around 45 cells.  Thirty-five of these make up the (nine to eleven) circular muscles and four longitudinal muscles.  The remaining cells (10 to 12) comprise the the nervous system.

When they reach maturity and are ready to reproduce the adults leave the host’s body.  In the sea they swim around until they meet an adult of the opposite sex.  Contact with a female’s body triggers a male to release his sperm.  Sperms released by the males penetrate the bodies of the females to achieve internal fertilization. The resulting zygote develops into an embryo in about 22 hours.  These embryo then develop into a ciliated larva.

This larva now leaves the mother’s body through her genital pore and searches for, and then enters, the body of a suitable host.  Once the larva have escaped the female dies.  Inside the host, it loses its cilia and grows larger to form a plasmodium (something a bit like a multicellular amoeba).

This plasmodium has many nuclei and is called multinucleate. Bits of this plasmodium may break off and form new plasmodia. This gives the animals an asexual form of reproduction.  This asexual reproduction post-infection can result in a large number of maturing plasmodium larva existing in a single host.  Eventually the plasmodia give rise to the sexual forms which soon leave the host and seek out reproductive partners and the Orthonectida life cycle is complete.

The taxonomy of the Orthonectida is very poorly understood, as is their relationship to other phyla on the tree of life.   As of early 2020 no molecular phylogeny studies are available for orthonectids. Within the phylum Orthonectida there are currently no recognized classes or orders.