Nematomorpha Etymology: From the Greek Nema for Thread, and Morphe for shape or form.

Nematomorphan Species Count:- There are currently 361 species of Nematomorpha known to science (COL), however scientists think there may be many more species as yet unrecognized.

The nematomorpha (Horsehair Worms) are relatively long, thin worms (1-3 mm diametre and 10-100 cm length). They are a smallish phylum, with about 361 known species.

They are called Horsehair Worms because they used to be found in horse watering troughs and they look like the hairs from a horses tail. Thus, before the advent of modern science, it was believed they arose spontaneously from the hairs from horse tails that fell into the water.

The nematomorpha have a second common name, Gordian Worms.  They derived this name from the mating habits of certain species who mate in a tangled bundle that to some people resembled the fabled Gordian Knot of Greek mythology.

They are most probably closely related to the nematodes and like them they move by muscularly induced, undulating waves passing along the body.

All known species are parasites and use arthropods as their primary host.  Usually an insect in the majority of species, however the few marine species use crustaceans as their primary host.  All known, bar a single species from North America, Gordius terrestris, whose biology was only described in 2021, Gordian Worms require water to live in as adults, which is the free-living and reproductive stage.

As many of their hosts are terrestrial they have evolved the ability to force their hosts to seek out aquatic environments when they are ready to leave the host.  The host usually dies after the emergence of the adult which is why it is common to find the hosts appearing as if drowned in water bodies containing adult Nematomorpha.

The adults may not feed, and do not they live long. Their only function in the life of the species is reproduction.

One of the unique features of Horse Hair Worms is their ability to escape the body of a predator that eats their host.  Nematomorph larva have been observed exiting the body of predators such as fish and frogs through various orifices; gills, mouth or nose.  This ability is unknown in any other parasite and presumably is facilitated by the fact that their natural habitat is the digestive tract of their host.

As adults the Nematomorpha are long and thin.  Their body is circular in cross-section and unsegmented.  They have no known respiratory, excretory or circulatory systems.  Seen undissected it is difficult to know which end is the front and which the tail as they lack any distinctive head morphology.  The posterior end may posses two small lobes.

Their body is covered externally by a cuticle that is secreted by the epidermis.  Immediately beneath the epidermis is a layer of longitudinal muscles.  Like nematodes, nematomorphs have no circular muscle. The cuticle of the larval form is thin, only a single layer of cells.  When the larva becomes an adult the cuticle become thicker and multilayered.

Internally the space between the digestive tract and the muscles of the epidermis is packed with a mix of mesenchyme and more fibrous collagen cells.  Nematomorpha are dioecious and gonorchoristic, meaning adults are either male or female and only this one gender.  The reproductive organs are long and thin as might be expected, extending the length of the gut in the body.  Near the posterior end of the gut there exists a cloaca.

The nervous system of most Nematomorpha consists of a anterior brain, a single ventral nerve cord (plus an additional dorsal cord in Nectonema spp.), and a basilateral nerve net.  The brain is a circumpharyngeal mass of nervous tissue, meaning it exist as a ring around the pharynx.

The mouth may be open or closed in adults, and the digestive tract may be reduced or blocked at the pharynx.  Even in juveniles the digestive tract is simple and it is probable that most nutrition is absorbed across the cuticle rather than taken in through the mouth. 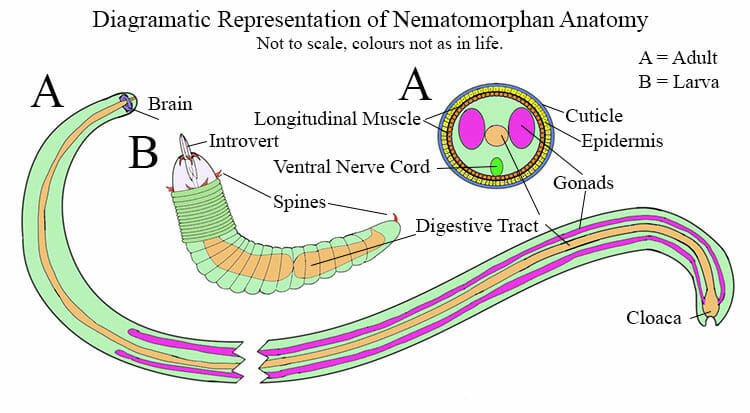 Nematomorphs are parasites of arthropods as juveniles,  though not necessarily aquatic ones.  Commonly parasitized groups include, but are not limited to beetles, cockroaches, mantids, orthopterans, and crustaceans.

The paratenic host serves as an intermediary, carrying the microscopic larva around until such times as it is eaten by a primary host.  No development occurs within the paratenic host.  Paratenic hosts are usually species that live in aquatic environments and include fish, Trematodes and insects with aquatic larva such as Mayflies, Caddisflies, Stoneflies. and True Flies such as Chironomids.  It is not yet known whether the paratenic host is an absolute requirement for species using terrestrial arthopods

The larva may hatch in the water and then enter the host, or be eaten by the host.  Either way the next stage is for the larva, which looks more like a Kinorhynchan than a true worm, to burrow into the host flesh and encyst itself.  The larva will awaken and leave the cyst when the host is eaten.  If the predator is not a suitable primary host the larva can encyst itself again.

The larvae have a better developed digestive system than the adults, but it is likely they derive most of their nutrition from nutrients absorbed through their body wall.  While it was once believed that adult Nematomorpha did not feed at all, it is now accepted, that in at least some species adults may also absorb nutrients.

Development of the nematomorpha larvae can takes from a few weeks to several months and there can be several generations per year. It is believed that the mature larvae somehow manipulate their non-aquatic hosts into seeking out water – though how this is accomplished is unknown.  The nematomorpha do not require the water they breed in to be deep, free flowing or permanent.  Areas of very wet ground are used by some species.

Most species inhabit freshwater and there is one marine genus which parasitizes crabs. In some species, individuals that mature in autumn form cysts on grass near to water and wait until spring before continuing their lives. 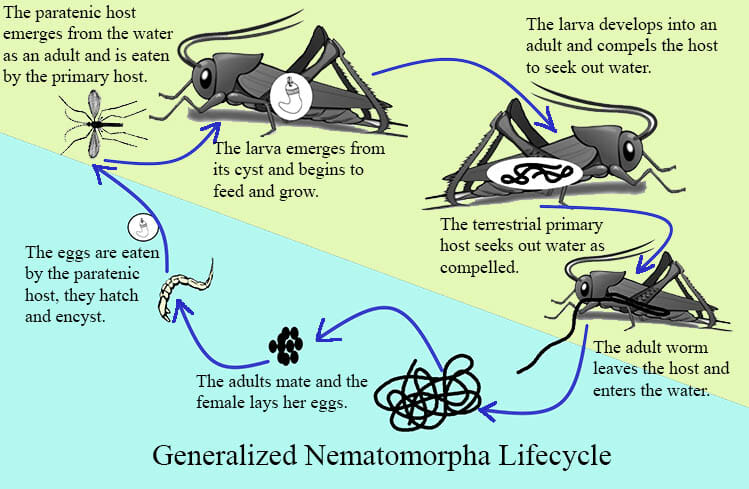 Females are normally sedentary and are searched for by the more active males.  Males can tract down females using scent.  Once a male has found a female it will curl itself around the female and deposit a spermatophore near the females cloaca. The sperm then swim into the female’s seminal receptacle, from where they can later fertilize her eggs. The female deposits her eggs in long strings, all stuck together and tangled around aquatic plants, or as a mass on some substrate such as a submerged rock.

The eggs take from 15 to 80 days to hatch. The larvae are free swimming and look like the Kinorhyncha, with scalid spines around their heads and a set of oral stylets (that can be everted or retracted into the body cavity) and not at all like their parents.

Once they have found a suitable primary host the larva begin to absorb nutrients and grow, rapidly becoming more worm-like.

The taxonomy and classification of the Nematomorpha is an on going study.  To date 361 species have been discovered but it is likely the final total will be quite a bit higher than this as 90+ species have been added to the total in the last 30 years including new species from India, Mexico and Taiwan in in 2020.  In terms of overall classification they are usually linked with the Nematoda, but also possibly with the Platyhelminthes.  As very few genetic analyses have been done yet the final position of the Nematomorpha in the tree of life is still to be determined.