Cycliophora Etymology: From the Greek Cyclos for round, and Phoros to bear. This relates to the circle of feeding cilia around the mouth.

Cycliophoran Species Count.  There are three to five known species of Cycliophora, but only two of them have been named so far.

The discovery of an animal that was – not only a new species – but of a whole new phylum of organisms, in 1995 by Reinhardt Kristensen and Peter Funch was perhaps the most exciting happening in the biological world in the last decade of the 20th century.

The first known species of Cycliophora, Symbion pandora was found living on the bristles surrounding the mouth of the Norway lobster Nephrops norvegicus. This is a relatively common species of crustacean which can be caught in the Kattegat Straits, a busy shipping lane between Sweden and Denmark – as well as around the Faroes.

The second described species, Symbion americanus, which occupies a similar ecological niche on the whiskers of the American Lobster (Homarus americanus) was descibed 2006.  Several other species are believed to exist in museum collections, but until they are fully described and identified the exact number of species will remain unknown. 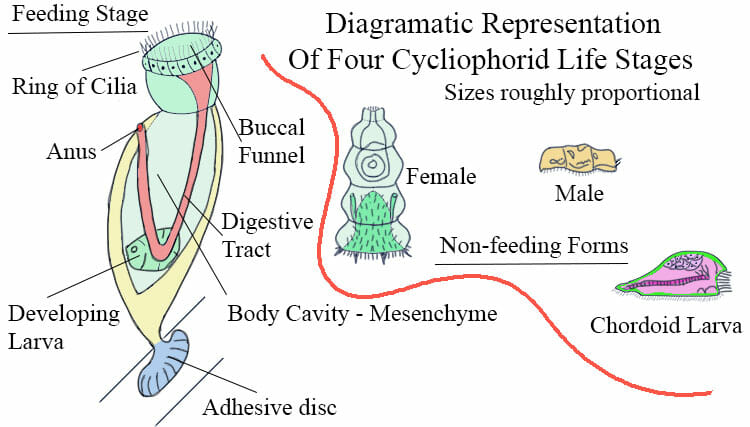 Basic Anatomy of the Cycliophora

During their complex lifecycles the Cycliophorans go through a variety of morphological changes, some of which are fairly similar and some are not.  As the body passes from one life stage to the next not only does the morphology change, the the genes expressed change.

The largest and most obvious stage is the adult feeding stage.  In this stage the body has a mouth, often called a buccal funnel, a rotund, somewhat barrel-shaped body and an adhesive disc.

The buccal funnel posses two longitudinal muscles and other longitudinal muscles occur in the body.  There are no nephridia, and only a simple set of nerves which are currently poorly understood. there may be a central ganglia, or brain in the neck.  Cycliophorans are acoelomate (do not possess a coelom) and the trunk is packed with mesenchyme (unspecialized) cells.

The whole external surface of the animal is covered in thin cuticle.

As an example of the changes between life stages; although the feeding stage possesses a digestive system and no nephridia the Chordoid larva possesses no digestive tract (and is a non-feeding stage) but does possess a pair of protonephridia.

The Ecology of the Cycliophora

Symbion pandora has a very complex life cycle, with a number of well-defined sessile and free swimming stages with different morphologies.  The complex life cycle of Symbion species is related to the moulting cycle of the lobsters they  live on.

None of the free-swimming stages feed and all of them are short-lived. The largest stage is the sessile feeding stage. This adult feeding stage of Symbion pandora is typically 350 μm long and lives attached by an adhesive disc to the lips, and the whiskers around the lips of the lobster.  Symbion americanus is slightly larger, its feeding stage can be 500 μm long.  Both species filter feed using a mouth surrounded by a ring of cilia.  There food is microscopic detritus, tiny particles of animal matter that are shed into the water by the lobster in its own feeding.

A single lobster can be host to hundreds and hundreds of specimens across the various forms of the Symbion life cycle.  However, as far as is currently known the lobster suffers no harm as a result of being home to these microscopic wonders

The reproductive cycle of Symbion pandora also involves asexual budding, dwarf males that settle on and attach to the adult females, other females which degenerate into larvae after settling, and a free swimming larvae which contains a new feeding stage.

To expand on the above simple description the adult feeding stage can produce three different sorts of offspring asexually.  These are termed the ‘Pandora Larva’, the ‘Prometheus Larva’ and the ‘Female’.

The Pandora larva becomes a new adult feeding stage and goes off to settle down on its own bit of lobster lip.  As such it represents a simple manifestation of asexual reproduction.

The Prometheus larva are small and non-feeding, they carry the genesis of sexual males within them.  They leave their parental adult and seek out a different adult.  When they find the new adult they attach themselves to the outside of this much larger adult.  Once attached they generate within themselves two or possibly three true males.  These males settle down and await the production of a female by their chosen adult.

Eventually the feeding adult produces a female larva.  This female larva remains within the feeding adult until a male finds it and fertilizes it.  Science is a bit hazy on the details of this part.  Once fertilized the female leaves the feeding body and encysts itself on the lobster’s lip.  Within this cyst a fertilized egg develops into another different sort of larva called a ‘Chordoid Larva’.

The Chordoid larva is the most mobile, and only free swimming form, of the species.  Once hatched it leaves the host lobster and swims off in search of another lobster.  Upon finding a new host it attaches itself, to a suitable lip, and gives rise to a new feeding form; thus the cycle is completed