Because the term fish includes such a diverse array of animals, it is difficult to talk in a general way about an average fish.

Thus the skeleton of an average bony fish looks like an arrow, where the skull represents the arrows head, the backbone or spine the arrows shaft and the tail represents the feathers. If we add a few barbs to our arrow, to represent the spines that run along the spine, we have a fairly good idea of the basic fish skeleton.

The skeleton of a modern bony fish, as shown below (and even the arrow above) represent the end point of a long period of evolution.

The skeleton of the first fish was probably very like the skeleton of a modern Hagfish, which is little more than an amalgamation of pieces of cartilage.

The skull of a Lamprey is a single cartilaginous trough with a few lobes and spines, while the spine is a simple sheath of cartilage surrounding the notochord. There is also a simple cage of cartilage to support the front-most parts of the viscera.

The skeleton of a Hagfish is even simpler. Sharks and Rays have a more complex skeletal system, which (for the most part) is still only cartilage and not bone. The skull however, is more complex than that of the Lamprey and is called a chondocranium which surrounds the brain and supports the sense organs.

Attached to the skull are the jaw cartilages, called the palatoquadrate cartilage (upper) and Meckel’s cartilage (lower). There are also branchial cartilages supporting the gills.

Evolution Of The Fish Skull

As fishes evolved, the number of bones involved in the head-capsule increased and their arrangement became more and more complex – as Nature experimented with different solutions to the problems of life in the sea. 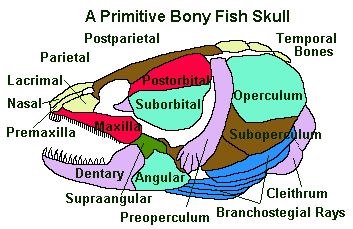 As can be seen in the image to the right, in the primitive bony fishes, the individual bones are larger and the amount of open space is restricted. Also, many of the bones are in different places, or have different shapes. Look particularly at the Maxilla and the Premaxilla in this picture and in the one below. In the primitive ray-finned fish, the premaxillar is small, not moveable and carries only a few front teeth – most of the teeth are on maxilla itself.

In comparison, in the more highly evolved (sometimes called ‘derived’) rayfinned fish, the premaxilla has taken over job of being the upper jaw bone and it is now larger, much more moveable and carries most, if not all, the teeth. The maxilla has taken on a supportive role. You should note that all these structural changes accompany, or allow, a functional change in the way the jaw works.

The jaws of the primitive fish work simply, much the way lizard jaws do. Whereas the derived fish’s jaws are a much more complex system of levers, allowing the mouth to move backwards and forwards as it opens and closes.

However, within the 28,000 species of fish there is room for a great deal of variety. For instance, Eels of the family Anguilidae (Anguilla rostrata, Anguilla anguilla) have no maxilla or premaxilla

As can be seen from the fish skeleton diagram at the top of the page, and more fully from the image to the right, the skull of a bony fish is a puzzle of extreme complexity – with many moving parts.

In this collection of small, interlocked bones the fishes strike an ecological balance between strength and lightness. The light-weight requirement is real because bone – being denser than water – requires muscle to move. The heavier a fish’s skeleton is, the more slowly it moves – both when escaping a larger enemy and when catching smaller prey.

The earliest fishes went in for heavy armour, which made them slow moving and restricted them to living only on the bottom of the sea. The picture below shows an artist’s impression of what a cambrian fish of the genus Hemicyclaspis may have looked like.

Whatever the colours of the fish were in real-life isn’t really important. What we can easily see here, and what is known from the fossil record, is that Hemicyclaspis had its entire head protected by a heavy, bony shield.

Evolution has created the modern fish, which in most instances, has a very low ratio of bone to muscle. It is fast and highly maneuverable and it claims the whole of the sea as its domain.

The vertebral column, or spine, of a fish is the main supporting structure for the muscles that the fish uses to swim.

Evolution Of The Fish Spine

The individual bones of the spine meet at their round centers, called ‘centra’. There is usually one vertebrae per body segment. Two flattened rods of bone arise from the upper side of the centrum. They are separated where they arise, but meet a little way above the centrum. The space thus formed is called the ‘Neural Arch’. Collectively, the neural arches of all the vertebrae form a tube that encloses and protects the spinal cord.

In most species of fish, the combined bony rods rise up as a Neural Spine above the Neural Arch. In some species of fish, such as the Salmon, a second pair of rods extend downwards creating a ‘Hemal Arch’ that serves to protect various blood vessels.

Unlike those of mammals and reptiles, the vertebrae of fish are not linked together – they are simply held in place by a series of tendons. In fish, both sides of the centrum are concave. The space between is filled with a ball of cartilaginous substance that holds them a little apart, allowing them to flex a bit.

There is an exception to this rule however, Garfish (Lepisostidae), have interlocking vertebrae much like those of reptiles. In other words the centra of the vertebrae are convex on the anterior or front face and concave on the posterior or behind face, allowing them to fit into each other.

The vertebrae that connect the skull to the spine are called the Atlas and the Axis, as in all vertebrates.

In the picture above, we can see representative vertebrae from three fish and two sharks: a Sturgeon, a Cod, a Salmon, a White Shark and an Angel Shark.

The Sturgeon, the Salmon and the sharks are seen front on (transverse view) and the Cod is seen side on (lateral view) to show that the processes – and hence the spines they make up – are not necessarily vertical.

The sturgeon is an ancient fish and represents the ancestral state.

In fact, the vertebrae of Sturgeon are not ossified (made into bone) and all the parts you see are in fact cartilage. The arrow represents the direction of evolution. The notochord is broken into sections, some of which become the bones of the centrum and the rest becomes the cartilaginous balls that keep the bones from damaging each other.

In sharks and rays you can see transitional states, whereby only part of each vertebrae is calcified. These hardened, or bony parts, which are normally in the form of rings or struts, are embedded in a matrix of ground material that is still cartilage.

The vertebrae of the trunk (the main part of the body) and the skull support a number of additional sets of bones. All of which may be present in varying degrees, in different fish species.

Extending sideways are the ribs, which protect the visceral cavity (the space where the guts are). Reaching up are a series of dorsal spines, which may be – but usually are not – in actual contact with the vertebrae. 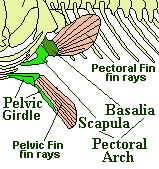 The tail is supported by the caudal vertebrae (the Hypurals, Epurals and the Urostyle). The Urostyle is the calcified unsegmented final portion of the old notochord. In those sharks which have highly asymmetric caudal fins, the cartilaginous end of the vertebral column often extends into – and supports – the larger upper lobe. 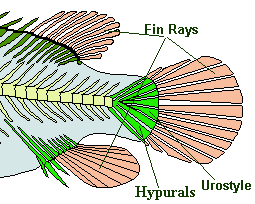 Well, I hope this has been an interesting introduction to the evolution of the fish skeleton!

Perhaps now you’d like to learn some more about fish anatomy.

1 thought on “Fish Skeleton 101: The Evolution Of These Bony Structures”