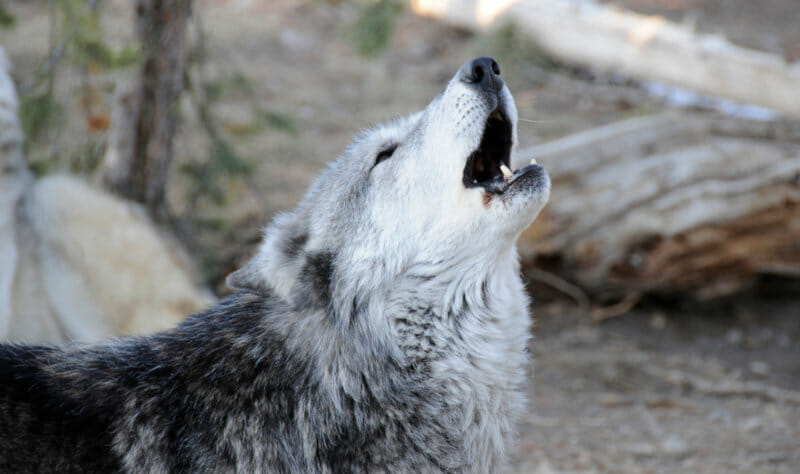 Wolves have different behaviors compared to other animals, and howling is a way they communicate with each other. They have strict pack hierarchies in place, so their voices sound differently also based on that.

But why do wolves howl? Do they do it out of fear? Do they do it to let other pack members know that a potential prey is in the area? Read on to find out the answers to these questions and more!

Why do wolves howl?

To pinpoint their location

Vocalizations are essential for wolves when it comes to telling the other members of their pack where they are and also if they might have found an animal to attack.

They use howling as a way of telling their families that they might be in danger and need their assistance.

Wolves have a much more capable sense of hearing compared to people and other animals.

They can often detect frequencies that humans are entirely oblivious to. Their hearing frequency ranges from 25kHz to 80kHz, which automatically sets them aside from people whose hearing frequency has a superior limit of just 20kHz.

Therefore, communicating their location to other pack members through howling and other sounds is effective and convenient.

To identify other pack members
Because they live in communities, wolves become very well acquainted with each other, both in terms of scent and hearing.

For this reason, they can recognize another wolf’s howl very easily, making it possible for them to tell exactly who’s trying to communicate with the pack.

To mark their territories

All wolves mark their territory to one extent or the other. Dogs do the same, so this behavior might be known to you if you’ve been a dog parent for a while. However, dogs that are kept indoors have to constantly try and mark their territories time and again, especially when they are taken out for walks.

It is different for wolves as they need to make sure that they are the ones that dominate a specific area. Their range can go up to 72 square miles (for the entire pack), but this can vary largely depending on the season.

In winter, they might have a smaller territory strictly because the weather and other conditions might make it more difficult for them to mark areas distant from their primary ones.

To deter intruders from the area
Howling is a vocalization method that wolves can rely on whenever they detect a potential intruder on their territory.

While it might not necessarily be used for other species – if they can be seen as prey – (since wolves have to at least try and be as inconspicuous as possible while hunting), wolves will howl if they discover that another wolf has entered their territory.

They do this both to signal to that wolf that it’s time for it to leave that area and also warn them that if it does not comply, it might risk being attacked by the entire pack.

Wolves can exhibit the same type of behavior toward dogs for the same reasons. 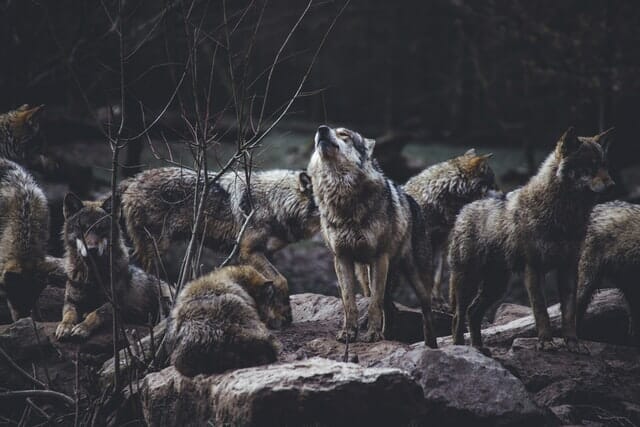 Since they are pack animals, whenever wolves attack a potential prey, they coordinate their efforts so that they are as successful as possible.

If you’ve ever been curious enough to look for footage of wolves attacking a deer, for instance, you might have noticed that they tend to do it from different directions.

But before they initiate the attack altogether, they have to make sure that every pack member is in the right position. If they were to all attack from the same direction, that would leave the prey plenty of opportunity to escape, particularly if they can run quickly.

Running fast is not an asset that wolves have because they are relatively small in size. Therefore, they will use howling and other types of vocalization to tell their other pack members that they’re positioned correctly and are ready to attack.

As difficult as it might be to believe, wolves rely on strategy whenever they look for food. All of the decisions they make are the result of a plan – they almost never attack an animal on their own and without being covered by the rest of the pack members.

To find a mate

Howling is a way that males and females can tell each other that they are prepared for mating.

Once they form a pair, wolf couples remain together for life. They will not look for other potential partners unless one of them dies.

Is it a coyote or a wolf?

Howling is used by both of these animals, but they differ both in terms of length and in terms of pitch.

Coyotes howl differently in that their sounds are much sharper and higher compared to those that wolves make. Additionally, they do not tend to howl for a long time – sometimes, it can be a couple of seconds.

On the other hand, wolves howl for seconds on end, mostly if they have something specific on their minds, such as deterring another wolf from their territory.

As for the time of day when you can expect either a coyote or a wolf to howl, they both do it from dusk until dawn. That is when they are most active.

Yes. Barking is not only characteristic of domestic dogs; it is another type of vocalization that wolves use to communicate with each other.

Furthermore, wolves rely on barking to warn other animals and humans. For instance, pack members can bark at a person if they have reached their habitat or are getting too close to the nest where they might keep their pups.

How far can a wolf howl be heard?

In open terrain, you can hear a wolf howl across an area measuring up to 10 miles. The reason this sound is so powerful is that they also tend to rely more on it during the night when there isn’t a lot of other noise potentially blocking these sounds.

The other sounds that wolves make, such as barking, growling, or whimpering, are less powerful, so people might not even be able to hear them at all – particularly from a distance.

Why do wolves howl at the moon?

Despite this being something that people have believed for centuries, wolves don’t bark at the moon.

It is true that the moon influences them like it does humans, especially in terms of how they feel, their aggression levels, or even their interest in mating.

However, they generally use howling to communicate with each other, and they don’t necessarily engage in it more often during a full moon.

So, why do wolves howl? For this species, howling is not only a way to transmit important messages to each other, but it can also be a way of strengthening a bond between pack members.

Howling is also used for mating, hunting, and protecting territories. Despite years of study, we still know too little about wolves to claim that these are the only reasons they howl – their behavior does not allow people to fully tap into their nature since they are so keen on being out of sight as much as possible.

Cristina Vulpe has an honours degree in Veterinary (2011) and PhD in Canine Oncology (2015). She is passionate about are animal welfare, infectious disease, parasitology, and pathology.