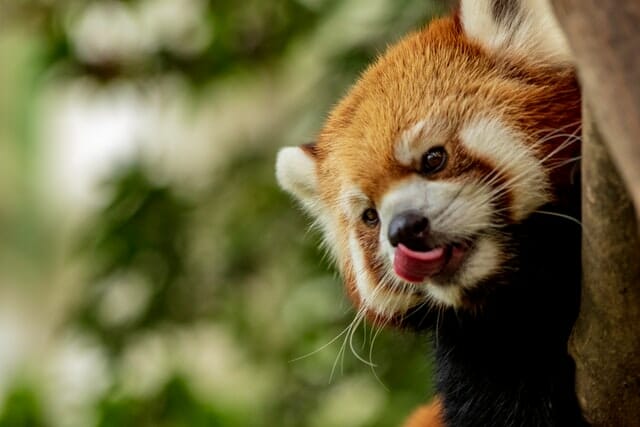 Although very different from one another, red pandas and panda bears do have something in common – their diet.

Did you know red pandas are actually carnivores? But what do red pandas eat in the wild or in captivity? What are their dietary needs? We’re answering these questions and more in today’s post, so keep on reading!

What food do red pandas eat?

Even though the red panda is technically a carnivore, it has adapted to a vegetarian diet.

Most of the diet of this species is now made up of bamboo, which can be found generously across the red panda’s natural habitat, meaning throughout China, Nepal, as well as Bhutan.

Red pandas munch on bamboo shoots and leaves all the time, to the point that this plant makes up as much as 95% of the animal’s diet.

But red pandas aren’t the only ones that have adapted from a carnivore diet to a vegetarian one. Other examples of animals that have done the same are Giant pandas, bamboo rats, and bamboo lemurs.

A red panda’s diet depends on what is available. As such, there is a seasonality involved, meaning that while during the spring, it will mostly eat bamboo shoots, in the fall, food sources such as lichens, grass, roots, fruits, as well as insects or bird eggs might be added to the mix.

Pregnant red pandas need a diet richer in protein compared to their counterparts, which is why they will eat more insects, and sometimes might even feed on birds or small rodents. 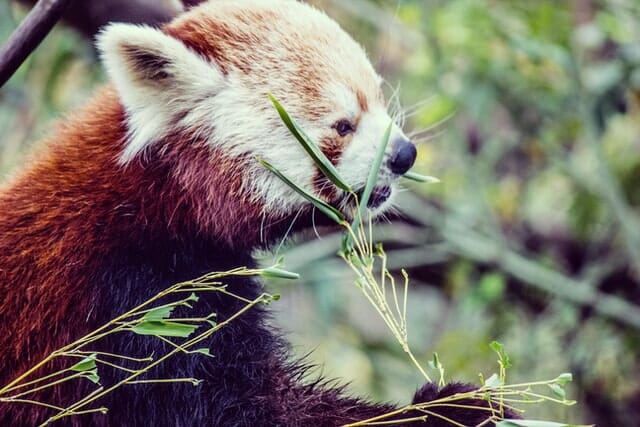 How do red pandas get their food?

Luckily for them, bamboo is available in generous quantities in the geographical areas that represent the species’ natural habitat. This means that red pandas don’t have to go through a lot of hassle to procure food.

However, bamboo isn’t extremely rich in protein and fat, so that is why these animals need to supplement their diets by hunting insects or looking for bird nests.

It’s not uncommon for a red panda to have to eat anything between 2 and 4 pounds of bamboo shoots per day just because it’s not the most filling food for this species. By comparison, the giant panda can eat as much as 20 to 45 pounds every day.

Also, because they are carnivores, red pandas have a much shorter gastrointestinal tract compared to herbivores, which means that they eliminate the bamboo they eat in a shorter amount of time.

Consequently, they can’t absorb all the fiber and the other nutrients from bamboo as they could if they were to have a meat-based diet.

As you can imagine, the physical features of a red panda do not make it as good a hunter as other animals. However, because they are smaller compared to other pandas, they are also lighter, so they can move faster. This gives them the opportunity to hunt down small prey, especially in the fall and winter months.

What do red pandas eat besides bamboo?

Several examples of other food sources for this type of panda are listed below:

Despite their higher protein necessities, red pandas have suffered certain anatomical adaptations so that they can eat bamboo and other plants. As such, even though they are fitted with sharp canines, their molars are very effective at chewing fibrous plant material.

What makes the red panda unique compared to other animals is that it is equipped with a ‘thumb’ that enables it to hold onto the bamboo parts so that feeding is more convenient.

In certain seasons, due to the lack of bamboo or other plants, red pandas can not only modify their diets, but they can also lower their metabolic rate so as to save energy for as long as possible.

How different is a red panda’s diet compared to that of other pandas?

The diet of various panda types isn’t as different from one another as you might think.

Pandas eat a lot of bamboo, even more than their red counterparts. While the diet of a red panda comprises about 95% bamboo, that of panda bears is made of 99% or more.

While they can be considered fully vegetarian, if they have to, panda bears might also hunt for small rodents or eat other plants – especially if they do not have access to enough bamboo.

The same goes for the Qinling panda, a subspecies of the giant panda, whose main food source also consists of bamboo.

Something that does make the difference between the way a giant panda and a red panda eat bamboo is the plant parts that each of them prefers.

For example, a giant panda will almost always eat the leaves, shoots, branches, as well as the bamboo culms.

On the other hand, a red panda will mostly eat lower leaves and young bamboo shoots.

What do red pandas eat in captivity? 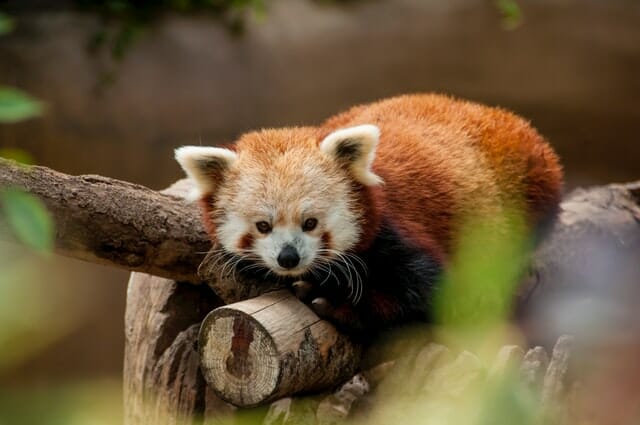 A typical red panda diet in captivity isn’t all that different compared to what this animal might eat in the wild.

Zoos and wildlife centers have to make sure that they have massive supplies of bamboo because of how much red pandas can eat every day.

Because acquiring that much bamboo can be problematic (given the plant’s natural habitat), these establishments often rely on things such as biscuits or other food sources to try and replicate a wild red panda’s ideal diet.

Unlike those that live in the wild, the red pandas that live in captivity might also receive some treats in the form of bananas, apples, and other types of fruit.

Mushrooms can make a good addition to their diet since they contain more protein compared to other foods.

Although keeping any kind of pandas in captivity is controversial, the truth is that this species is on the brink of being threatened. The population of wild red pandas is quite low these days, so zoos and other centers cannot get any individuals from the wild – they have to try to breed them.

Cristina Vulpe has an honours degree in Veterinary (2011) and PhD in Canine Oncology (2015). She is passionate about are animal welfare, infectious disease, parasitology, and pathology.