The basic definition of dangerous is able or likely to cause harm or injury. This means that a snake living in your backyard, even if it is smaller, less venomous, or less aggressive, can be more dangerous than a large, highly venomous, or aggressive snake across the globe simply because it is more likely to harm you. Despite this, there are a number of snakes that are generally regarded as the most dangerous snake in the world. 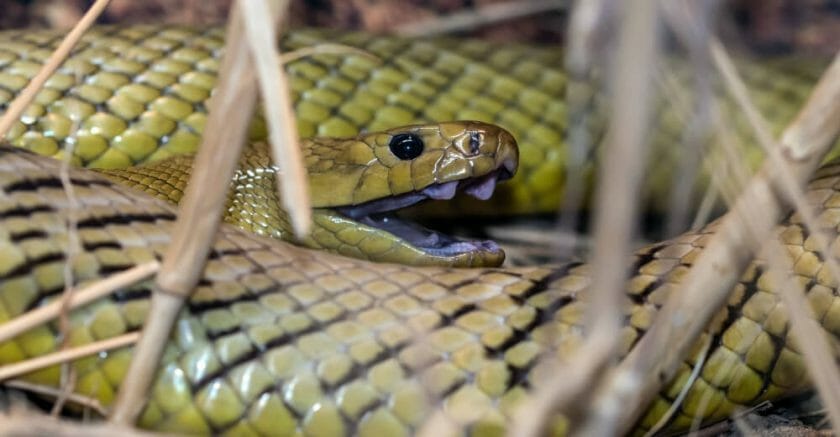 The Inland Taipan is generally regarded as the world’s most venomous snake, with a single bite enough to kill 100 adult humans within an hour. In addition to the impressive toxicity of their venom, the hyaluronidase enzyme accelerates the rate at which the venom is absorbed into the victim’s body. The neurotoxins, procoagulants, and myotoxins in their venom can cause both clottings and hemorrhage in blood vessels, hinder breathing, damage muscles, and paralyze the nervous system.

Inland taipans are usually dark tan, ranging from a brownish-light green to a rich, dark brown, depending on the season. A bit smaller than coastal taipans, these can grow to approximately 5.5 feet long.

Native to Australia, they are mostly found in the southern region of the country, Queensland, as well as the northern territory. The inland taipan is a reclusive snake who prefers to live tucked away, often in clay burrows previously dug by other animals.

Most active during the early morning and afternoon, this snake is very shy and prefers to avoid human contact. When encountered by people, inland taipans are not particularly aggressive but will defend themselves by coiling into a tight S-shape before darting out to bite once or multiple times.

Their prey consists of small and medium-sized mammals, primary rodents such as the long-haired rat, plains rat, and house mouse. Looking for food and basking in the sun is how these snakes spend the majority of their time. 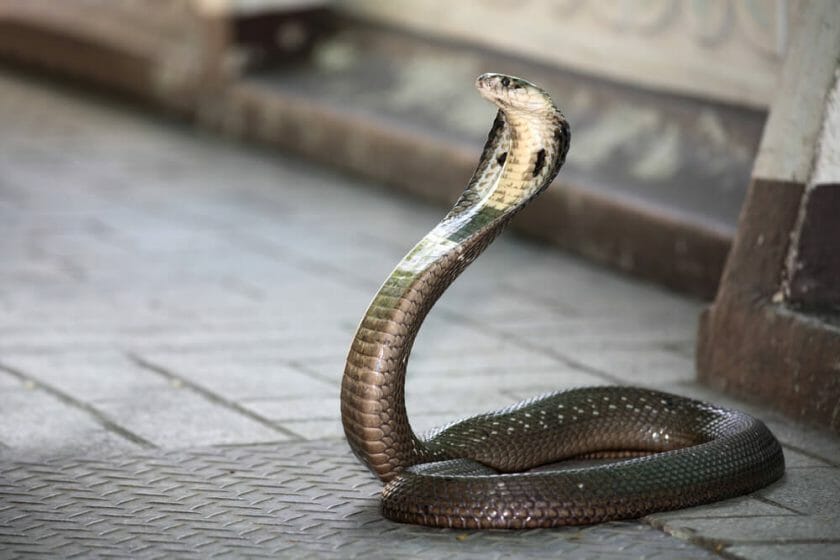 The thing that makes King Cobras so unique is not the strength of their venom, but the amount of venom they can inject into their victims. Each bite touts approximately 7 milliliters of venom, and three or four bites in rapid succession are common when the snake attacks. Neurotoxins found in the venom paralyze their prey and eventually prevent breathing, creating a 50% fatality rate for untreated bites in humans.

King Cobras are usually brown or dark olive in color, with white or pale yellow crossbands down their body. This snake holds the record for the world’s longest venomous snake, commonly reaching three to four meters long, but capable of measuring up to 18 feet long.

These snakes are native to forested areas across Asia, with notable populations in southern China, northern India, Indonesia, the Malay peninsula, and the Philippines. They typically prefer to live in areas close to forest streams, agricultural spaces, and trees.

Like most snakes, King Cobras are shy and avoid confrontation, however, when provoked, they can become incredibly aggressive. When they feel threatened, cobras often lift their head as high as one-third of their total length off the ground and flare out the “hood” or skin around their head to appear larger and more intimidating.

King cobras usually prefer to eat other snakes, even venomous ones, but will eat lizards, rodents, and birds when food is scarce. When not hunting or defending

themselves, they are surprisingly nurturing towards their young. Female king cobras are dedicated and caring, unlike most snakes, building a nest and guarding their eggs until they are hatched. 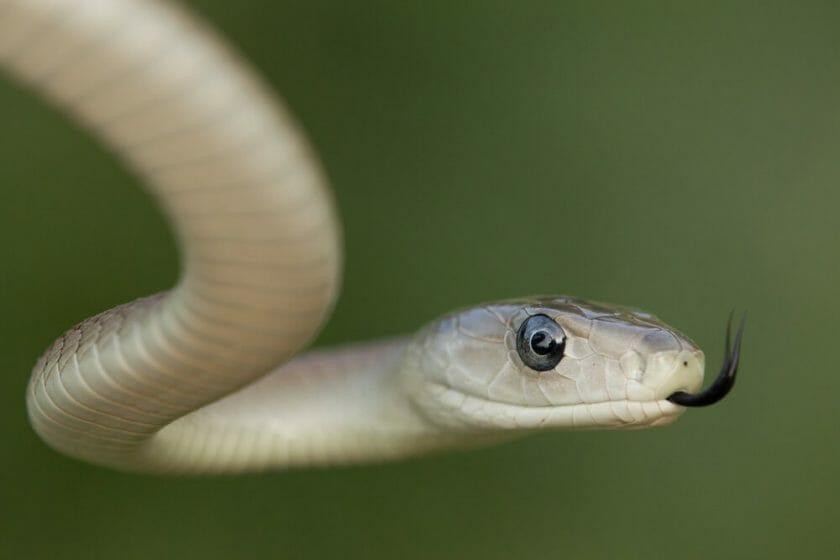 Black Mambas are infamous for being the most venomous snake in their home range, Africa. Because their extremely toxic venom causes systemic paralysis,

people who are bitten should receive antivenom treatment as soon as possible for a chance at survival. It is said that their venom is so potent that just two drops are enough to kill the average adult human, and by adulthood, black mambas can store up to 20 drops in each fang.

Rather than the color of their body, which can be olive, yellowish-brown, khaki, or gunmetal, they get their name from the color on the inside of their mouth. Black mambas are between 6.5 and 8 feet long, with a maximum length of 14 feet from head to tail.

Black mambas inhabit vast areas of hill country, dry brushlands, and forests across Sub-Saharan countries in Africa. Unfortunately, much of this land has a large human population, so incidents can occur frequently.

Ethiopia, Tanzania, Uganda, and the Democratic Republic of the Congo, are particularly dangerous areas since black mambas will attack with repeated bites

when provoked or cornered. While they prefer to avoid humans when possible, their self-defense is borderline aggressive when needed.

Black mambas prefer to eat small mammals and birds but will eat other snakes if they have to. When they aren’t eating, these snakes are capable of traveling at up to 12 miles per hour, which is partly why they are so dangerous.

The saw-scaled viper is well-known as the snake responsible for the most human deaths each year, largely due to the lack of readily available antivenom. Although their venom is lethal less than 10% of the time, their aggressive nature and inhabitation of well-populated areas mean that they bite often and without hesitation.

Their scales are typically a mosaic of brown, tan, grey, or orange with darker dorsal scales and lateral spots. Saw-scaled vipers are small snakes, typically measuring between one and three feet long, with a stout body and pear-shaped head.

These vipers are usually found in dry, arid regions just north of the Equator such as Africa, India, Sri Lanka, and Pakistan. Their coloring makes them well-suited to camouflaging themselves in sandy areas, often completely covered except for their head.

Unlike some of the other snakes we’ve discussed, saw-scaled vipers are highly irritable and aggressive and use a looping figure-8 as a defensive posture. Rather than a hissing sound like other snakes, these snakes rub special, serrated scales together to make a sizzling sound.

Because they are nocturnal, saw-scaled vipers typically hunt at night and prefer lizards, toads, and baby birds. They also use their venom on their more intense prey, like larger mammals, birds, other snakes, amphibians, and even scorpions. 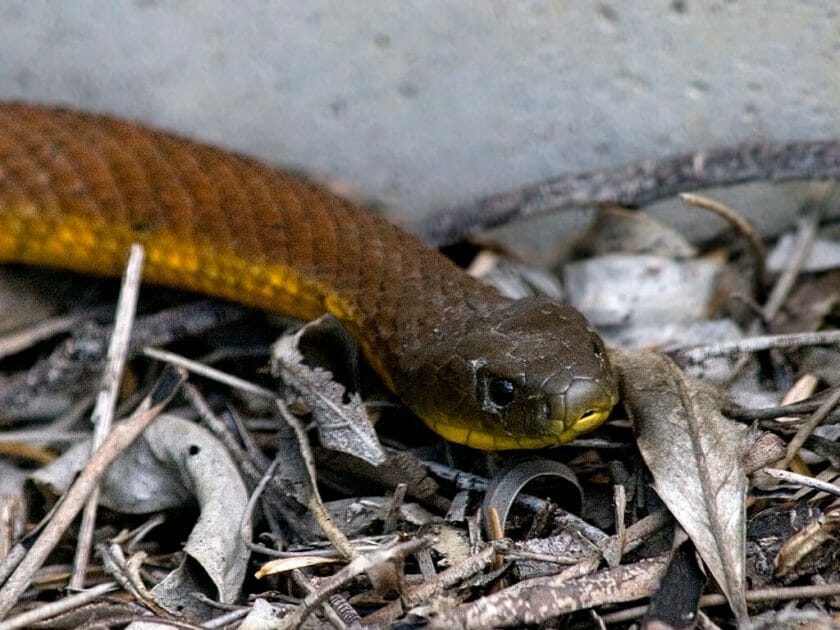 This snake is known for its highly potent venom, which has neurotoxins, coagulants, myotoxins, and hemolysins which create a 60% mortality rate in humans. If bitten by an Eastern Tiger Snake, the victim will suffer extreme pain, excessive sweating, trouble breathing, numbness, body tingling, and paralysis.

These snakes can come in a range of colors and sizes including all shades of yellows, browns, all the way to jet black are typically banded along their body. Tiger snakes can grow to lengths of three to five feet long.

Native to the grasslands and mountains of southeast Australia and coastal islands, Eastern Tiger Snakes enjoy inhabiting creeks, rivers, and wetlands. Although they are ground-dwelling snakes, they are great climbers and excellent swimmers.

These snakes prefer to avoid humans if at all possible and can become aggressive when startled. They usually prefer to slither away rather than fight, but will raise, hiss loudly, and inflate their body as defensive maneuvers. If those fail, and the snake feels threatened, they will strike.

Eastern Tiger Snakes primarily live on frogs, but will also eat fish, birds, other reptiles, and small mammals. They have also been known to eat carrion when other food was not available.

SafarisAfricana. (2021, May 6). Most Venomous Snakes In The World: 11 of the world’s most dangerous snakes. SafarisAfricana. Retrieved March 21, 2022, from https://safarisafricana.com/most-venomous-snakes/

Jack is a zoologist and author from the UK. After graduating university, he moved to Costa Rica to study sea turtle nesting behavior. He quickly fell in love with the country and soon began to work at a rescue center for native Costa Rican wildlife. He now specializes in human-wildlife conflicts, and how humans can sustainably coexist with nature. He has rescued and raised orphaned monkeys, sloths and coatis. Instagram Profile.