The trogoniformes are a small order of brightly coloured birds, found in most tropical countries except Australasia.

The exact number of species is not finally defined yet, but it is around 37.

These are divided between 8 genera and 1 family, Trogonidae.

Commonly they are known as Trogons and are one of the most colourful orders of birds.

The Resplendent Quetzal, Pharomachrus mocinno, is the national bird of Guatemala. It was believed to be of divine origin by the Aztecs and it was an offence to kill one. Unfortunately, since Cortes destroyed the Aztec empire, this protection has been removed and its numbers have been steadily declining ever since. It is a species of cloud forest above 1300 m (4000 ft). 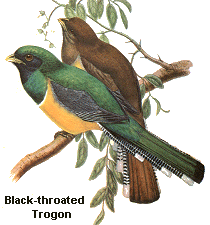 Trogons range in size from 23cm (9 ins) in length (the Black-throated Trogon) to 103cm (37 ins) (the male Resplendent Quetzel). However, two thirds of this length is tail feathers only.

All trogons are arboreal and most live entirely within forests or woods. None are known to be migratory. They are unique in that they have the first and second toes pointing backwards, while the third and fourth toes point forwards.

This is known as heterodactylous.

Compare this with the parrots and other birds which have two toes pointing each way, where it is the first and fourth toes which point backwards and the second and third which point forwards -known as zygodactylous.

Trogons are tropical birds with 3 species in Africa, 11 species in Asia and the rest occurring in the Americas, including the West Indies. 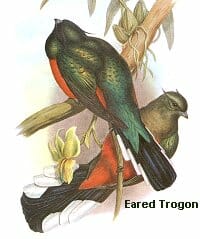 Trogons are relatively wide mouthed birds, which gives their faces a look similar to nightjars and swifts. However they are not particularly closely related to either of these groups.

The similarity in bill design results from the evolutionary requirements of their modes of feeding, i.e. taking insects in flight.

Most Trogons are primarily insectivorous, but will also eat fruit and the larger species will also take small lizards. Insects are mostly taken in mid-air, as the birds sally forth from a perch.

Hence Trogons are normally seen sitting quietly on a branch. They are normally solitary birds and the males attract the females in the breeding season with whistle-like call notes.

They are known for having delicate and easily torn skins which results in the easy loss of feathers. 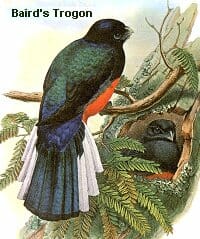 Trogons nest in cavities, either those already in trees, or by excavating them in dead trees or abandoned termite and social wasp nests. The nest is sparsely lined and the 2 to 4 glossy white eggs are incubated by both sexes. Incubation takes about 17-19 days and the young are altricial meaning they are naked and helpless when they first hatch. The young are fed on regurgitated insects and fledge in 3-4 weeks. Both parents take part in feeding and protecting the young.

Little information is readily available on Trogons and exceptions to the general information supplied may well come to light when more is known about their ecology.

3 species of Trogon are on the ICBP threatened species list: