Hummingbirds are small colourful birds. In areas where they occur, they are seen in peoples gardens.

Their hovering, or sudden darting flight is very distinctive, allowing most people to recognise them immediately.

Not really that big – you might think – but quite large for a hummingbird with their high energy demands. 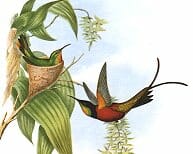 Hummingbirds are in fact all very similar structurally.

They are related to swifts and have similarly short legs and reduced bones in their wings. They do not walk and use their legs and feet only for perching. They are therefore excellent flyers capable of flying sideways, backwards and of hovering with high precision.

The name Hummingbird comes from the sound made by the wings in flight. 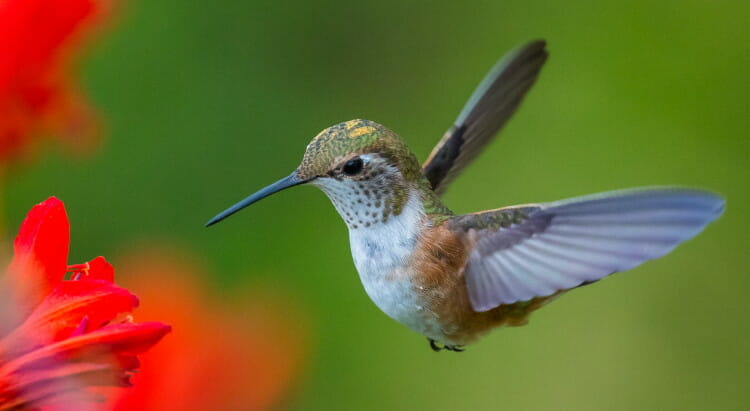 Below a certain temperature hummingbirds can enter a state of torpor. Migratory species and those with more northerly, southerly or mountain distributions tend to fall into torpor more fully during the night.

Whether or not a particular bird enters torpor overnight depends not only on the air temperature, but also on how much the bird was able to find to eat around dusk.

There are 320 species, all of which are found in the Americas from Alaska to Tierra del Fuego.

A number of species are migratory and in the colder extremes of their habitat range, they are only present during the warmer times of the year.

Hummingbirds have a high requirement for energy because of their very active flight. They feed on nectar from a variety of flowers and are important pollinators of several groups of plants.

Nectar is, however, low in protein so they also eat a good quantity of insect material. Most Hummingbirds have relatively long bills to aid the acquisition of nectar from flowers.

The length of a hummingbird’s bill is related to the depth of the corolla of the flowers it feeds from – as many hummingbirds have evolved alongside their preferred food flowers.

A bird that only visits one species of flower is far more use as a pollinator to the flower, than one who visits many different species – and in the process takes its precious pollen to an incompatible flower.

Thus flowers with deep corollas can only be pollinated by hummingbirds with long bills. This is seen at its most extreme in the Sword-billed Hummingbird (Ensifera ensifera) whose bill is longer than its body and tail together. It is the only bird in the world with a bill of such proportions.

Like bees, Hummingbirds assess the amount of sugar in the nectar they eat. 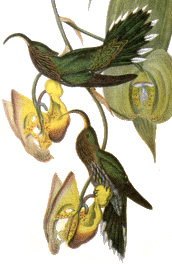 They reject flower types that produce nectar which is less than 12% sugar and prefer those whose sugar content is around 25%.

Hummingbirds do not spend all day flying, the energy costs of this would be prohibitive. In fact, they spend most of their lives sitting, perching and watching the world.

Hummingbirds feed in many small doses, consuming up to their own body weight in nectar and insects per day. They spend an average 10%-15% of their time feeding and 75%-80% sitting, digesting and watching.

To obtain this much food requires a lot of work though. Scientists have recorded a Costa’s Hummingbirds making 42 feeding flights in 6-5 hours, during which time it visited 1,311 flowers.

Most Hummingbirds have straight bills of various lengths. Though some are slightly down, or upwardly curved. Though the curves are gentle in most cases, they are extreme in a few cases such as Sicklebills whose bills are extremely down-curved to help them access their particular choice of flowers.

Hummingbirds, particularly the males, are tinged with iridescent colours; reds, greens, blues and yellow are all evident. In males, the brightest colours are often located on the top of the head and the throat where they can be presented to the female during courtship.

Males of a number of species also have highly ornamental tails including the impressive V-tail of the Green-tailed Trainbearer (Lesbia nuna) and the elaborate tail streamers of species such as the Racket-tailed Coquette (Discosura longicauda).

Courtship is relatively simple, involving fast swooping flight displays – which result in the male hovering in front of the female showing off his bright colours. After mating, the female builds the nest on her own.

Hummingbird nests are usually built of mosses, lichens and spider’s webs. They can be hung from a leaf or suspended below a branch, in which case their construction may involve hanging counterweights to keep the nest horizontal.

In most species the nest is a simple cup attached to the top of a horizontal branch.

The female lays two white eggs in the nest and incubates them herself. The eggs hatch after about two weeks and the young are altricial, meaning that they have no adult feathers and are restricted to the nest.

The female feeds them by inserting her bill into the throat of the youngster and regurgitating food. The young take 3-4 weeks to fledge.

Both adults and young have the ability to enter a sort of torpid state to overcome periods of food shortage caused by inclement weather. Adult Hummingbirds feed every 15-20 minutes during the day unless migrating when they tend to survive on stored fat reserves.

Hummingbirds are aggressive birds, which in some cases defend territories even outside of the breeding season.

They will defend their territory or a good flower patch, not only from other Hummingbirds, but also from birds of a much larger species – even hawks. They can get away with this because their manoeuvrability in the air is far greater than the larger birds.

One is to maintain a territory containing good nectar sources and defend this against all comers. The second strategy involves trap-lining patches of high reward flowers. This means the bird will have a flight route that takes it from one patch of flowers to the next, which it can travel several times a day. In this way the flowers can load a new supply of nectar between visits.

Some species of flowers – with a distribution along a northwards transect in the USA – come into flower in harmony with a migrating Hummingbird species. So that as the bird travels north, it always has food available and the flowers always have a dedicated pollinator each spring.

Hummingbirds are considered by many scientists to have evolved relatively recently, making them a thoroughly modern bird.

There are no Hummingbird fossils so their evolution is difficult to discern. However, their consignment to their own order, Trochiliformes, is the result of modern DNA analyses confirming that their physical similarities to Swifts are the result of convergent evolution, rather than a close relationship.

It seems likely that they evolved in the tropical forests of South America, as this is where the greatest species diversity occurs. Over half the known species live in Ecuador and northern Brazil.

Like many other tropical birds many Hummingbirds are currently endangered by habitat destruction resulting from logging and clearing for farming.

Well, I hope you have enjoyed these hummingbird facts, check out their beautiful song while you’re here!

The order Trochiliformes is truly an incredible one. Perhaps now you’d like to check out the trogons.