The birds of paradise are the most amazing and incredibly colourful family of birds.

It is suspected that trade in skins and tail feathers of these birds has been going on in S. E. Asia for around 5,000 years. The natives of Papua New Guinea have used the tail feathers as adornment for as long as is known and probably long before that.

There is no doubt that the males are stunningly beautiful in some species.

This beauty has also had the positive result that they have received a fair amount of attention from ornithologists over the last 150 years. 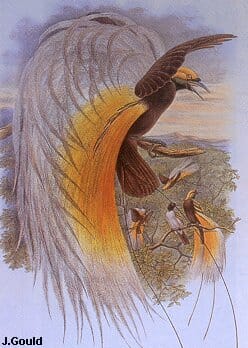 There are 42 species of Birds of Paradise in 17 genera, distributed mainly across the Islands of Papua New Guinea and Irian Jaya as well as in North Eastern Australia.

Birds of Paradise are related to crows and all species have 10 primaries and 12 tail feathers. Many species have greatly elongated and elaborate sets of feathers arising form the tail, wings or head.

Birds of Paradise are relatively large birds, which for the most part occupy distinct habitats. Many species show an altitude controlled distribution.

Birds of Paradise (as far as is known) are relatively long-lived birds, with lives extending well over 15 and perhaps up to 25 years.

The males of some species take up to 5 years to mature and attain their splendid plumage, females, however, breed in their second year.

Though a few species occasionally take nectar or herpetofauna (frogs, lizards, etc.), most species feed primarily on arthropods (insects and spiders) and fruits.

Within the 42 species, a full range of diets can be found from the practically entirely frugivorous (fruit eating) Loria’s Bird of Paradise and Crested Bird of Paradise, to the greater than 80% arthropod diet of the Buff-tailed Sicklebill.

Most species are believed to feed on a mixture of arthropods and fruit.

Though for 16 species, so little is known of their diet that little if anything can be said about their preferences. Of the remainder, 20 are predominantly frugivorous and only 6 are known to feed preferentially on arthropods.

The sicklebills are predominantly insectivorous and possess long down-curved bills which they use for digging insects out of rotten wood, or from behind bark.

Rifle birds – which are also insectivorous – are almost woodpecker-like in the effort they expend to dig out insect larvae out of dead wood.

In the lowland rainforests, Birds of Paradise typically forage in the forest at a height of between 20 to 30 m above ground. They are often seen in mixed flocks of birds also containing Babblers and Drongos.

Breeding in Birds of Paradise 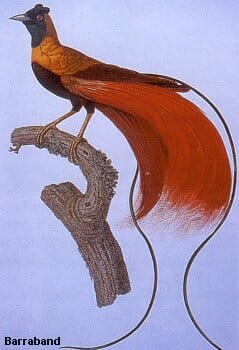 Many Birds of Paradise are highly sexually dimorphic, with the males being larger and much more brightly coloured that the females.

The exceptions are the 5 species of Manucode, the Paradise Crow, Macgregor’s Bird of Paradise and the Long-tailed and Short-tailed Paradigalla. Of these 9, 7 are monogamous (1 male to 1 female pairings) or believed to be so.

The remaining 35 species are all polygynous, with males displaying their bright plumage to attract a number of females.

After mating the female builds the nest and raises the 1 or 2, sometimes 3, young on her own. Of these 35 polygynous species, 22 have the male displaying solitarily in a ‘court’ he prepares himself. These ‘courts’ can be quite large and are defended from other males.

Of the remaining species, 12 are ‘lek’ species. A ‘lek’ is where a number of males gather together and all display themselves as much as they can. Females attend the lek and choose a male to mate with.

One species, the Yellow-breasted Bird of Paradise remains unknown as nothing has yet been observed of its courtship. Most males sing loudly, if not musically to our ears, while displaying.

All species, as far as is known, are solitary nesters.

Most species lay 1-2, occasionally 3, eggs. The young are altricial (meaning they are born with no or few feathers and can not stand or walk, they are basically helpless) and are fed by one or both parents until they fledge. 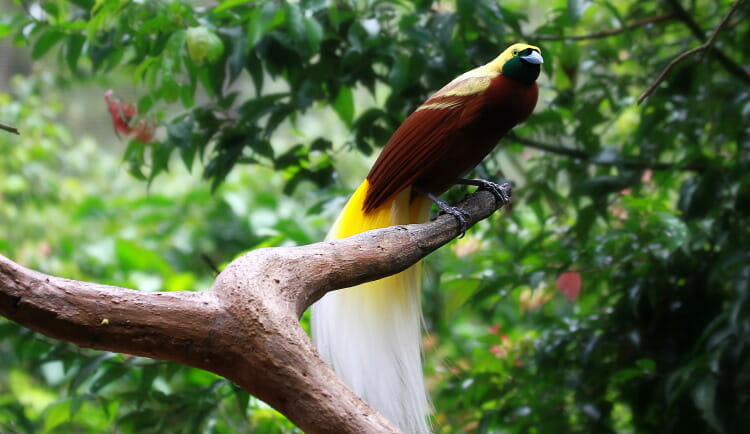 Incubation, where known, is between 14 and 26 days with most species taking around 18-19 days.

The nestling period (the time from hatching to fledging) is between 17-30 days with 20-22 days being the most common duration. Birds of Paradise hybridise in the wild, perhaps more so than any other bird family and 21 different crosses are recorded as having happened in the wild.

Hybridisation appears to be limited to the polygynous species.

Trade In Birds of Paradise 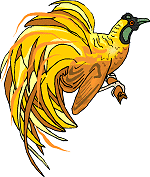 The relationship between man and Birds of Paradise has been based almost entirely on trading the exotic and colourful plumes of the males for most of the history of civilisation.

It is known that they were highly valued in Asia 2000 years ago.

However, they did not become know to the western world until the 16th century. In 1520 the Sultan of Batchian presented the Portuguese Sea Captain Magellan with several Birds of Paradise skins, as presents for the King of Spain.

They described them as Birds of the Gods and they created quite a stir in Europe when they arrived.

The New Guinea natives prepared skins for export by removing their feet and wings. When some inquisitive sailors asked to natives of the Moluccas how the birds lived, they were told that they were the ‘bolong diuata’ – the Birds of the Gods.

They floated in heaven and fed on dew until they died and fell to earth. It was 150 years before this myth was fully vanquished from the European mind.

Meanwhile, as time moved on, various rich naturalists travelled to Papua New Guinea and observed some Birds of Paradise in the wild.

More and more skins were sent back to Europe and the USA… and the beauty of the feathers inevitably resulted in them becoming fashionable ornaments for ladies’ hats. Soon a thriving trade was running in Birds of Paradise skins.

By the end of the 19th century, thousands of male birds – mostly Paradisaea species – were being exported from Papua New Guinea. Between 1904 and 1908, 155,000 skins were sold in London alone.

However, the end was close.

Groups like the RSPB in England and the Audubon Society in the USA, as well as local governments, became concerned at the rate and huge extent of this callous decimation of the worlds beauty.

Since Papua and New Guinea have been united, no skins have legally left the country – although skins continue to be exported from Irian Jaya via Indonesia. In 1990 the Indonesian government passed a law banning trade in Birds of Paradise skins in Indonesia, so shutting the final door on this grisly trade.

Birds of Paradise were also popular in aviaries, though breeding was never very successful and now it is rare to find them in captivity in any but the largest aviary complexes.

Despite this excess of killing, no Birds of Paradise are currently endangered.

If any threat exists to Birds of Paradise populations, it will be habitat destruction.

The reasons that the trade in skins did not damage population relates to the facts that most species are polygynous, so one male can impregnate numerous females.

Also important is the fact that only males were collected. Males mature sexually in their second year but do not have their mature plumage and therefore do not normally mate, for several more years.

However, in the absence of males with fully mature plumage those with intermediate plumage would be able to find mates.

Birds of Paradise remain fascinating to many humans still.

However, the trade now is only in observations and knowledge. The work of many dedicated ornithologists presented in modern TV documentaries continues to bring their beauty to our eyes.

Rest assured that this brief look at the Birds of Paradise of the family Paradisaeidae, has barely scratched the surface of these incredible birds.

2 thoughts on “Birds of Paradise: The Stunningly Beautiful Family Of Paradisaeidae”